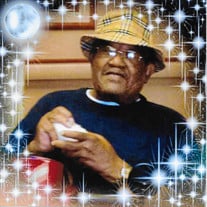 Calvin James Taylor was born to the late Mabel and Morris Lester Taylor, Sr. on August 5th, 1931. He along with his sister, Hortense (D), and two brothers, Morris Lester, Jr. (D) Thomas was raised in the Sandtown Winchester area of Baltimore by a very strong mother. He received his education thru the Baltimore City Public School System. On June 30th, 1950 Calvin married his first love Margaret Elizabeth Black, this union produced seven children, six girls, and one boy. They remained married until her death in 1985. Calvin (AKA Chicken growing up) was a true family man. Sometimes driving a cab during the day and working the night shift at Carlins National Brewery. A job in which he was employed from May 1956 until a horrific car accident which resulted in a terrible head injury that prevented him from continuing. Calvin loved his family and did his best to provide and protect them, especially his girls. He enjoyed playing cards with his family and friends, going to the race track, and listening to all types of music. He would tell some corny jokes, so corny sometimes you just had to laugh. He loved cooking for his family sometimes spending hours in the kitchen. But there was nothing like the smell of his home­made Parker House rolls made from scratch, they would fill the house and make you want to come eat. But that was nothing compared to his love for dancing. He won several dancing contests at the Arc Social Club where he was an active member, He was also the President of his family social club “Generation Gap”. Calvin gave his life to Christ at a mature age. Joining First Christian Community Church under the watchful eyes of the late Rev. E. Humphrey. He sang on the male chorus. His favorite song to sing was “His Eyes is on the Sparrow”. Preceding him in death is his wife, Margaret, his oldest daughter, Jean M., and his son, Eugene A. Calvin leaves to cherish his love and memories: his remaining daughters, Doris Little (Richard); E Ann Taylor, Crystal Rhodes, Shirl T. Farrare (Tony), and Darlene T. Williams; Bro. Musufa El W.; cousin, Shirley Lathan; seventeen grands, thirty-five great grands and two great great grands; brothers-in-law, Bill and Bob Black; three sisters-in-law, Seens, Queenie and Bessie Black; and a host of family and friends.

Calvin James Taylor was born to the late Mabel and Morris Lester Taylor, Sr. on August 5th, 1931. He along with his sister, Hortense (D), and two brothers, Morris Lester, Jr. (D) Thomas was raised in the Sandtown Winchester area of Baltimore... View Obituary & Service Information

The family of Calvin J. Taylor created this Life Tributes page to make it easy to share your memories.

Calvin James Taylor was born to the late Mabel and Morris Lester...