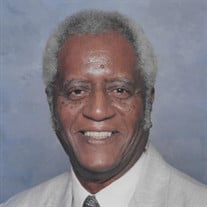 The memory of a good person is a blessing. Proverbs 10:7 After a brief battle with illness, Calvin Marcell Stanley Sr. was called from labor to rest on Monday, April 18, 2022. The second of three sons, Calvin was born to the late Florence F. and Howard W. Stanley Jr. on February 27, 1930. Calvin was educated in the Baltimore City School system where he graduated from Dunbar High School in 1949. He joined the US Air Force in 1951. In December of that year, Calvin married the love of his life, Gloria Margaret Terry, and from that union, two sons were born, Calvin Jr. (Mark) and Larry Wayne. Calvin served as crew chief and turboprop engine mechanic on B-36 and B-47 bombers during the Korean War, where he attained the rank of Staff Sergeant and was honorably discharged in 1955. Calvin worked for many years at the BWI Division of Westinghouse as a sheet metal fabrication specialist, forging components for Air Force fighter jets and NASA’s Gemini and early Apollo missions. In 1967, he was recognized and financially rewarded, for his suggestion to modify the manufacturing process, saving the company thousands in production costs. Calvin always had aspirations of having his own business and controlling his own direction. He continued his studies, at Morgan University, and in 1969, left Westinghouse to pursue his dream. With his brother Robert Stanley and friend Forest Carver, they created CaFoRo Ind., a Black-owned and operated sheet metal fabrication enterprise with over 30 second-chance and inner-city employees. Calvin was dedicated to Christ at an early age and raised his sons to know and trust in the Lord and to have the courage of their convictions. He taught Sunday School for several years at Mt. Ararat Baptist Church, and later joined Wayland Baptist Church where he served faithfully for many years and sang in the Men’s choir. After the passing of his wife Gloria in 1998, he joined his sons Calvin and Larry in membership and worship at Zion Baptist Church, where he participated in several programs and enjoyed being a part of the Singles Again Ministry. Calvin was a quiet man who mostly kept to himself. But if asked his opinion, you’d better have the time to listen. He fancied himself a historian, a mentor, a spiritual advisor, a helper, a neighbor, a father, a friend, and was always happy to serve. Calvin is preceded in his return home to the Lord by his loving wife, Gloria, brothers Howard III and Robert, and youngest son Larry. Calvin leaves to mourn his loss, his son Calvin (Lorain) Stanley Jr., granddaughter Kimberly (Melvin) Pollard, grandsons Darnee Stanley, Larry (Gina) Pritchett, daughter-in-law Templena (Larry) Stanley, brother-in-law Lonnie Terry, sister-in-law Connie Robertson-Terry, nine great-grandchildren, one aunt, and a host of cousins, nieces, nephews, and friends.

The memory of a good person is a blessing. Proverbs 10:7 After a brief battle with illness, Calvin Marcell Stanley Sr. was called from labor to rest on Monday, April 18, 2022. The second of three sons, Calvin was born to the late Florence... View Obituary & Service Information

The family of Calvin Marcell Stanley Sr. created this Life Tributes page to make it easy to share your memories.

The memory of a good person is a blessing.
Proverbs 10:7

Send flowers to the Stanley family.