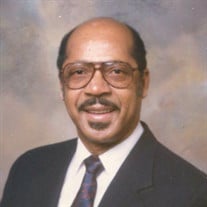 On May 7, 2021 CALVIN EMERSON LAWSON transitioned peacefully from labor to reward at the Gilchrist Center located in Howard County, Maryland. He was 96 years old. Calvin was born on December 14, 1924 in Elams, North Carolina to the late Willie E. Henry and Nancy Stark Lawson. Calvin’s childhood as the son of sharecroppers living in the south, provided him with an appreciation for hard work and responsibility, having to work in the fields plowing, picking cotton and harvesting tobacco, peanuts and corn. Because of his commitment to the farm, his education was thwarted during his elementary years. He accepted Jesus Christ at an early age, and became a member of Patillos Chapel Baptist Church in Henrico, North Carolina. Upon reaching adulthood, Calvin accepted a position at Roanoke Rapids Hospital, which was quite an accomplishment for a black man during the “Jim Crow” era. It was during this time that he met and courted the late Sarah Alice Squire. Seeking better opportunities for themselves and their family, they relocated to Baltimore, Maryland. On November 3, 1952 Calvin and Sarah were united in Holy Matrimony at their apt. located on West Preston Street. The late Dr. Julian Price officiated the ceremony. Calvin and Sarah were married for 62 years, when on August 3, 2015, Sarah was suddenly and unexpectedly, taken from us much too soon. She was the love of his life, and vice versa. What a beautiful couple!! In April, year 1953, Calvin and his new bride, Sarah, were led to worship and fellowship at the Second Baptist Church, under the Pastorship of the late Dr. Julian Price. Calvin was a faithful and dedicated steward, servant and member for 65 years. During that time, he served in many capacities and Ministries in the church: Trustee, Treasurer, Board Member, Male Chorus, and Interior Decorator. He received many Awards, Plaques, Certificates of Service, and accolades too many to list. He was a great Pillar of the church and of the community. His favorite Scripture became, Ecclesiastes 3: 1-8 (v. 1-To everything there is a season, and a time to every purpose under the heaven). He grew to favor two songs: “We’ve Come a Long Way” and “Thank You Jesus” with the lyrics, “You brought me from a mighty long way. ” During the next 31 years from March 5, 1956 to April 1, 1987, he was employed at Westinghouse Electric Corporation in Baltimore; another major accomplishment for that time in history. After his retirement from Westinghouse Electric in 1987, he became an entrepreneur and started his own painting company, painting homes, churches and business establishments in and around the Baltimore, Washington Metropolitan area, and in other states. This was a source of love, joy and pride. He managed a successful painting business for 25 years. His favorable reputation always preceded him and he was well-known as an honest, dependable person. Calvin had a love for sports and hobbies such as fishing, deer hunting and gardening (vegetables and flowers). His most loved passion was baseball, a sport he played as a youngster. His favorite team was the Baltimore Orioles! Calvin is preceded in death by his son Freddie Melvin Davis, his daughter Hannah Mae Squire, two brothers Rytholey Lawson, Sr. and Eulis Lawson Sr. and two sisters Hattie Lawson and Sylvia Cooper. His spirit, life, love and memories will be cherished by: his four children, Olivia Brodie (Dover, Delaware), Rev. Carolyn (Walter) Fredricks of Laurel, Maryland, Calvin (Novita) Lawson of Sachse, Texas Donald (Myrna) Lawson, Dolphin, Virginia; sister, Ella Carlton of Asheville, North Carolina; eleven grandchildren, three great grandchildren, two great-great grandchildren, and a host of nieces, nephews, cousins and other relatives and friends. Servant of God, well done, rest from thy love employ; The battle is fought, the victory is won, enter now thy Master’s joy. Lovingly submitted, The Family

On May 7, 2021 CALVIN EMERSON LAWSON transitioned peacefully from labor to reward at the Gilchrist Center located in Howard County, Maryland. He was 96 years old. Calvin was born on December 14, 1924 in Elams, North Carolina to the late Willie... View Obituary & Service Information

The family of Calvin E. Lawson created this Life Tributes page to make it easy to share your memories.

On May 7, 2021 CALVIN EMERSON LAWSON transitioned peacefully
from...

Send flowers to the Lawson family.