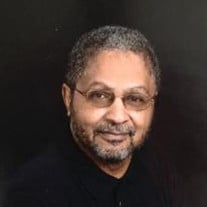 Born on December 9, 1943, in Newport News, Virginia to Calvin Sr. and Louise Brown, Calvin Brown Jr. was the oldest of three children. Calvin was educated in the Virginia Public School System until the family moved to Baltimore City, Maryland in 1955. He was happy about relocating to the city because that meant no more farming – that wasn’t his forte. On June 11, 1959, Calvin gave his life to Christ and was baptized at First Mt. Calvary Baptist Church. As a child, Calvin loved playing card games, bike riding, and playing chess. He was also pretty resourceful. One time, Calvin wanted to skate through the neighborhood, but he didn’t have a pair of skates. To solve the problem, Calvin made his own skates using wood and a few wheels. He was an outstanding high school baseball player, but he didn’t like watching the game on television – he said it was too slow. As a teenager, Calvin worked in a shoe shop and ice-cream parlor. His boss took a special interest in him, which helped Calvin to become business-minded. He also learned leadership skills when his parents would always place him in charge of his siblings when they were away. Calvin attended Baltimore City Public Schools, graduating from Douglas High School in 1962. He earned a B.S. Degree in Business from Morgan College (Morgan State University) in 1968. Calvin was drafted into the United States Army and was a soldier in Vietnam. He was honorably discharged in 1973. After returning home, he re-enrolled in Morgan to work on getting his Master’s Degree in Urban Planning. Calvin used his problem-solving skills to help others resolve their own. He worked for the Maryland Vocational Rehabilitation Services as a caseworker for 30 years. Calvin worked hard to ensure that not only his clients, but his family and friends had the resources they needed. He retired in 2002. He capitalized in real estate and learned carpentry by rehabbing his own properties. If asked what he does for a living, Calvin would say, “I rehab people and houses.” Calvin was well-respected by all who knew him. Calvin enjoyed watching CNN and MSNBC, and reading the Baltimore Sun Newspaper and the Washington Post. His favorite movie was “Shane,” and his favorite television show was “The Godfather of Harlem.” Before Calvin became ill and had to change his diet, he loved seafood, chocolate chip cookies, mashed potatoes, greens, apple pie, and chocolate cake. He also loved Dunkin Donuts and coffee. There were times when Calvin didn’t want to be disturbed: when watching football and basketball games, and when he was taking his “old-man’s nap.” He was a staunch Democrat, and loved to talk about politics and the “power of the people;” especially to young people. Calvin was the “Go-to Guy” when you needed a listener, a confidant, a driver, a counselor, a peacemaker,a financial advisor, an encourager, or a friend. Conversing with Calvin meant that he would impart some wisdom or humor you with a few jokes. Calvin loved to not only tell long stories, but write them too. Most of us got a history lesson or two from Calvin, especially when he said, “It’s not where you come from, but where you’re going.” He was so selfless that on his 75th birthday, he wanted to use his birthday party as an opportunity to show the younger generation the importance of family. Calvin was everything to everybody. He was very compassionate, and he was consistent in how he lived his life and loved his family. Calvin fell in love with Janice Thaxton, whom he affectionately called “Jan,” and the two were married on February 15, 1997. Calvin and Janice loved to take yearly trips together. They even drove cross country together because Calvin did not like to fly. He devoted most of his time to Jan and their grandchildren. He is survived by his wife, Janice Brown; his son Brian Hardy (Tracy-daughter in law); daughter, Talonia (“Nicky”) Trent; [previous wife, Madeline Brown, preceded him in death in 1991]; stepson, Troy Joyner (Shawna-daughter in law); 1 sister, Evelyn Harris; 1 brother, James Brown Sr; 8 grandchildren; 2 great-grandchildren; 5 nieces; 1 nephew; 9 great-nephews; 3 great-nieces; and a host of other family and friends

Born on December 9, 1943, in Newport News, Virginia to Calvin Sr. and Louise Brown, Calvin Brown Jr. was the oldest of three children. Calvin was educated in the Virginia Public School System until the family moved to Baltimore City, Maryland... View Obituary & Service Information

The family of Calvin Brown Jr. created this Life Tributes page to make it easy to share your memories.