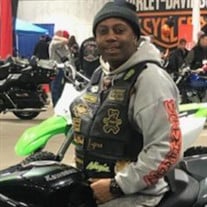 On June 2, 1964, God sent the spirit of a Good Samaritan to Earth planted deep inside BYRON KEITH GORDON. He was the first-born son of Catherine (Green) Gordon & Clifton Gordon. Byron departed this earthly life very unexpectedly on September 5, 2021. A member of New Psalmist Baptist Church, Byron’s mission was clear & apparent to anyone who truly knew him, to “Find a need and fill it.” And that was exactly what he did. Compassion in his heart always drew him to folks who had a need. Byron demonstrated this compassion by caring for his widowed Grandmother who had been struggling to live independently, and later caring for his mother Catherine Gordon, who went to be with the Lord in March of this year. Anyone who knew Byron was touched by his kindness, his humor, and his mild temperament. Byron was educated in the public school system of Baltimore City. He attended Greenspring Middle School and Northwestern High School, where he had the opportunity to nourish his passion for computers. After finishing high school, Byron worked for many years in the Lighting Industry, and excelled in his work for companies like Geller Lighting and Industrial Lighting Group. Prior to his sudden death, Byron worked for IAA Inc. In 2003, Byron again answered the call to help anyone with a need when he met Sonjia Conaway on the side of the road with a flat tire. As usual, Byron sprang into action and did what he needed to do to get her back home safely. That chance encounter led to Byron and Sonjia dating, and later marrying in 2005. From this union, God gave Byron his greatest earthly gift, twin daughters Sophia Catherine Gordon and Sahara Ann Gordon, the center of his joy. We call them Sophia and Sahara, but God called them “Well Done.” A little taste of Heaven for Byron right here on Earth and proof that when one tries his best to do God’s will, God recognizes it and sends Joy into your life. Byron loved to enjoy life and had a great love of fast cars and motorcycles. In the early 2000’s, Byron bought his first motorcycle and joined the Black Tigers Motorcycle Club, adopting the rider’s name “Creeper”. Byron genuinely loved being a part of the Black Tigers, and the club quickly became his family. In line with his giving and compassionate heart, Byron was a regular participant at the Bea Gaddy Thanksgiving Drive with the club and served as a faithful member of the Security Team at the club’s annual pajama party held every year in November. Byron leaves to cherish his memory: his twin daughters, Sophia and Sahara Gordon; his brother, Robert Gordon, and sister-in-law Terry Gordon; his aunt, Cecelia Mcleod; his life-long friend, Hassan El-Wahhabi; best friend, David Bratton; nieces Maiella, Kirstesia, Crystal, and Angel; his entire Black Tigers Motorcycle Club family and a host of other relatives and friends who loved him.

The family of Byron Keith Gordon created this Life Tributes page to make it easy to share your memories.

Send flowers to the Gordon family.