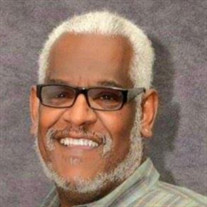 Donations to Morning Star Baptist Church's Scholarship fund can be made using Cash App. The payment code is $MSBCSTAR. In the memo field please write For scholarship fund in honor of Bruce Adams. ““Let nothing be done through selfish ambition or conceit, but in lowliness of mind let each esteem others better than himself. Let each of you look out not only for his own interests, but also for the interests of others.” Phillippians 2:3-4 On the evening of the 1st day of October 2021, BRUCE T. ADAMS, a Man of God who put the needs of others before his own, a man who served, not for recognition or accolades, but for the Glory of God, was called home to rest in the Lord our Savior, Jesus the Christ. Bruce T. Adams was in the house of God, surrounded by the Saints of God when he was called to rest. Born Bruce Tyrone Glenn on November 09, 1951, in Annapolis Maryland, his late Mother and Father were Marion Smith and Napoleon Glenn, respectively. Bruce had a number of siblings, and at the age of 5 was chosen to be adopted by Arlene and his late adopted father Henry Adams, who were close family friends of Marion and Napoleon Glenn. Bruce was educated in the public schools of Annapolis, Maryland and graduated from Annapolis High School in 1970. Following graduation, Bruce served approximately 2 years in the United States Air Force. Following his departure from the USAF, Bruce attended Anne Arundel Community College, where he met his first wife-to-be, Cynthia Elaine Covington. The two married in 1976 and had a son, Christopher Mark Adams, on June 7th, 1977. With aspirations of working in law enforcement, Bruce became a Correctional Officer for the Department of Corrections in Jessup, Maryland. Bruce served as a Correctional Officer for over 20 years and eventually retired. After retirement Bruce would go on to work as a Security Officer at Bon Secours and Sinai Hospital. He would eventually step away from his security duties and work with his son Christopher, to help him build KTS Mental Health Group, Inc; an Outpatient Mental Health Clinic that serves the people of Baltimore, Frederick, and Hagerstown, Maryland. Bruce met his second wife-to-be, Saundra Spratley, and the two would marry on February 18th, 1995. Bruce would gain a stepson in Jammal Charles Spratley with his marriage to Saundra. Bruce was raised within the Catholic Faith; however, Saundra introduced Bruce to Immanuel Temple AME Church in July of 1995 under the late Pastor Peggy Walls. Bruce developed longstanding relationships within Immanuel Temple AME Church, and at Immanuel Temple is where his Christian Faith began to mature and grow. Bruce and Saundra would eventually leave Immanuel Temple AME and would attend Morning Star Baptist Church under Bishop Dwayne C. Debnam, and in 2011 Bruce would be Water Baptized in the name of the Father, the Son, and the Holy Ghost. Bruce was bold in his faith and had a strong belief in putting the needs of others above his own needs. His spirit of Servitude would lead him to serve in several capacities at Morning Star Baptist Church to include: The Men’s Choir, the Men’s Discipleship class from which he graduated, Pearls of Wisdom Ministry, The Great Commission Ministry as a Treasurer, the Usher Board, a parking volunteer

Donations to Morning Star Baptist Church's Scholarship fund can be made using Cash App. The payment code is $MSBCSTAR. In the memo field please write For scholarship fund in honor of Bruce Adams. &#8220;&#8220;Let nothing be done through selfish... View Obituary & Service Information

The family of Bruce Tyrone Adams created this Life Tributes page to make it easy to share your memories.