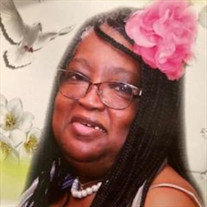 Brenda Ann Wheeler aka Brenda McMillion, daughter of William A. and Ida Belle (Bennett) McMillion was born May 23, 1953 in Baltimore, MD. The seventh of twelve children. She departed this life on July 26, 2021. She received her education from Baltimore City public schools and graduated from Eastern Senior High School in 1972. Upon completion of graduation, she began working at a nursing home which is now known as Overlea Health and Rehab Center. From there, she worked briefly at the American can company on Boston Street. Next, Brenda began, working in the Baltimore City about 10 years. She worked as a tax preparer and began working as a customer service representative for Baltimore Medical System until retirement. Brenda was well known throughout east Baltimore and was known to many as “Aunt Bren” She was passionate about cooking, teaching and taking care of children. She loved spending time with family, eating crabs, the casino And preparing taxes. Brenda also enjoyed sitting on the front steps telling stories, dancing, listening to music and was famous for her rhyming sayings. She was famous for standing out in any crowd and always adding her two cents to everything. Aunt Bren always made her home open to anyone who needed it. She was always there to help in whatever she could. Brenda was a true character, to know her was to love her. She was a generous soul and a special presence. She was a wonder mother, a loving and devoted grandmother, a great sister, awesome aunt and dedicated friend. Brenda was preceded in death by her parents, William A. and Ida B. McMillion; husband, Paul Lee; Son, Michael Lee; brothers, William A. Walter Thomas and Roy Edward; sisters, Delphine Pearl, Ella Delores, Valarie Pauline and Wanda Grace. Brenda leaves to cherish: grandchildren, Nai’Mah and Aminah Lee; brothers, David (Rhonda), Ernest (Deirdre), and Rodney; sister Linda Pearl; daughter-in-law, Michelle Lee; several godchildren and a host of nieces, nephews, great nieces, great nephews and friends.

Brenda Ann Wheeler aka Brenda McMillion, daughter of William A. and Ida Belle (Bennett) McMillion was born May 23, 1953 in Baltimore, MD. The seventh of twelve children. She departed this life on July 26, 2021. She received her education from... View Obituary & Service Information

The family of Brenda Wheeler created this Life Tributes page to make it easy to share your memories.

Send flowers to the Wheeler family.