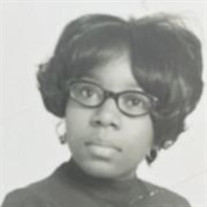 Brenda Gail Vinson Walker was born on July 1, 1950 in Goldsboro, North Carolina to Freddie Vinson, Sr. and Adell Turner. She was preceded in death by her parents, and her husband, Waverly Benjamin Walker. Brenda received her formal education... View Obituary & Service Information

The family of Brenda Gail Walker created this Life Tributes page to make it easy to share your memories.