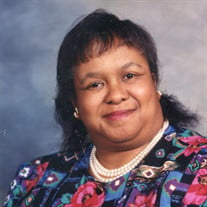 Brenda Mae Green White, daughter of the late Thomas and Ada Mae Green, was born October 28, 1954, in Pittsburgh, Pennsylvania. She entered eternal rest on March 16, 2022, at VCU CCU in Richmond, Virginia. "Bump" as she was known by her friends, received her education in Allegheny County Public Schools where she graduated from Duquesne High School in 1972 and was working for Duquesne Steel as well. After graduating, Brenda went to Nursing School where she received her LPN license. In August 1977, she welcomed a daughter named Tory. Putting her nursing skills to the test, Brenda worked at Central Medical in Pittsburgh for a number of years before she, her mother, and Tory moved to Richmond, Virginia in 1986. She quickly started her LPN role at MCVs Brain Injury Rehab (North 1) for many years...taking care of numerous patients and their families. After leaving MCV, she met Nathan White Sr. and they happily married in August 1997-moving to Sandston, where she welcomed his four children as her own. Brenda continued her passion of healthcare at many Nursing Home facilities throughout Henrico County, before leaving it behind in 2007 and moving into her "Framma" role soon after. Brenda enjoyed traveling, watching her "old shows" on the Food Network, going out for some good eats, laughing and playing games with w/JB & Vaeh, talking with family/friends-especially Aunt Winnie & Donna and her dogs-Abby and Jethro! Brenda's parents: Thomas and Ada Mae Green, siblings Jenette Green and Leroy Hickson, husband, Nathan White Sr., and grandson, Cullen Kilgore Jr., preceded her in death. Cherishing her memory is her devoted daughter Tory Green; Tory Green, Denise Parker (David Jr.) Sandra and Pamela White and son, Nathan Jr. (Arjetta); grandchildren, Jordan and Nevaeh Breaker; David III, and Christopher Parker, Brandyn, Briana, and Brian White, three great-grandchildren; a devoted aunt, Winnie George; and a host of relatives and friends. A Message From Heaven Perhaps you aren’t ready yet to have to say goodbye.. Perhaps you’ve thought of things you wish you’d said.. well, so have I For one thing, I’d have told you not to worry about me. I’m with the Lord in Heaven now you knew that’s where I’d be. I’m sorry that you’re feeling sad for I’m so happy now. I’ve asked the Lord to ease the hurt and comfort you somehow. It’s hard at the beginning, but I know you’ll make it through. I hope it helps to know that I’ll be waiting here for you.

Brenda Mae Green White, daughter of the late Thomas and Ada Mae Green, was born October 28, 1954, in Pittsburgh, Pennsylvania. She entered eternal rest on March 16, 2022, at VCU CCU in Richmond, Virginia. "Bump" as she was known by her friends,... View Obituary & Service Information

The family of Brenda Mae Green White created this Life Tributes page to make it easy to share your memories.