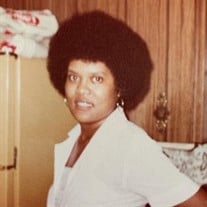 MRS. BRENDA JOYCE STRICKLAND KESS, loving daughter of Earnest and Frosty Strickland, was born on March 25, 1949 in Fairbluff, North Carolina. Brenda transitioned from her earthly home to her eternal rest on January 3, 2022 at the nursing and rehabilitation home in Catonsville at 3:00 a.m. She attended the Public School System in North Carolina and graduated from Columbus High School on June 2, 1967. She later attended North Carolina A & T University where she received a Bachelor of Arts degree in Social Work. She also was a member of Alpha Kappa Alpha Sorority, Inc.. She then went on to pursue her graduate studies in Chicago. She attended the University of Chicago and later was awarded a Master of Arts degree from the School of Social Service Administration on June 8, 1973. She then relocated to Baltimore City where she began a career in social work. She later met her husband Gerald A. Kess Jr. and they were married October 17, 1977 at City Hall. From that union a son was born, Jason Juan Kess. Brenda loved her job as a social worker. She loved working with people and helping them. She received various awards for her efforts. She retired from Baltimore City Social Services in 1999. She worked for Martin Pollak for several years after retirement, before becoming ill. Brenda was a devoted member of Huber Memorial Church for many years. She loved to read the Bible and was a member of Bible Study class. When she became ill, she watched the pastor on television for as long as she could. She took two generations of Kess’s with her to the church as children, her son, and their granddaughter. Brenda loved the church. Brenda leaves to cherish her memory: her husband, Gerald A. Kess Jr.; two grandchildren, Briairra Te’Asia Kess of Baltimore and Jaiden Joseph Kess of Pennsylvania; great-grandson, Jayce Juan Harding of Baltimore; five sisters, Louise Washington, Eleouise Graham, Gladys Young of Fairbluff, North Carolina, Rose Freman and Evon Strickland from East Point, Georgia; and a host of other relatives and friends.

MRS. BRENDA JOYCE STRICKLAND KESS, loving daughter of Earnest and Frosty Strickland, was born on March 25, 1949 in Fairbluff, North Carolina. Brenda transitioned from her earthly home to her eternal rest on January 3, 2022 at the nursing and... View Obituary & Service Information

The family of Brenda Joyce Kess created this Life Tributes page to make it easy to share your memories.

Send flowers to the Kess family.