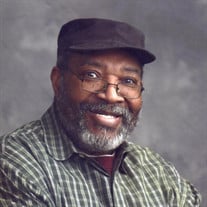 Mr. Bobie Jean Taylor, proud Marine Veteran, of Richmond, Virginia peacefully entered into eternal rest on March 6, 2021. Bobie was preceded in death by his parents Hillard Taylor and Mary Wilson, his paternal grand parents Horace Taylor and Annie Queen Jackson, maternal grandparents Dennis Miles and Mary Mitchell, 3 brothers Louis Taylor and John and Tom Taylor. Bobie was born in Climax, Decatur County, Georgia. He was raised by his parents, along with his paternal grandparents. He learned to tend to the land and developed his knack for gardening and landscaping while working hard with his paternal grandparents on the family’s farm. He also attended the local churches, elementary, and junior high school in Attapulgus, Decatur County area of Georgia. In the spring of 1960, the family relocated to Youngstown, Ohio. Bobie attended The Rayen High School where he later graduated in June 1964 at the age of 17. In that same year, he enlisted in the United States Marie Corps. He served 4 years Active Duty and 2 years as reservist. He was drafted to the Vietnam War. While serving his country, he was wounded and received the Purple Heart Medal. Upon returning home to the States in the summer of 1966, he was stationed in Camp Lejune in North Carolina. While stationed in Camp Lejune, he was able to attend NCO leadership school. It wasn’t long before he set sail on a United States Aircraft Carrier for a 15 month deployment on a Mediterranean Cruise Tour. Throughout his Military career Bobie received several medals, which includes Good Conduct, National Defense, Vietnamese Service, Vietnamese Campaign, and Purple Heart. His Active Duty Military Career ended when he was Honorably discharged. Our dad was very proud to be a Marine and you would often hear him make the statement proudly, “I am a Marine”! Bobie went on to new career opportunities, within the work force. He worked at United States Postal Service and the Defense General Supply Center (Bellwood) where he later retired as a Material Examiner and Identifier. Bobie was affectionately known as Dad, Daddy, Poppa, Pops, Grandpa Bobie by his children and grandchildren. By his friends, he would be called Bob, Wet or Wetlook (he loved his wet look shirts). Daddy loved fashion and looking oh so ever sharp in any attire he wore. He made sure that his attire stayed sharp and fresh, by taking his clothes to the cleaners; every crease had its place. I am pretty sure that we will need to take a trip to the cleaners to obtain a couple of his suits that are still there. Don’t get us started on his shoes. Dad also loved old westerns and cowboy movies. He loved to dance, grilling, and having cookouts. He also loooove to fish! And boy did he have a love for Cadillacs, apple red with a white top to be more specific. Bobie is survived by Sharon Taylor the mother of his daughter Ebone’ Taylor; daughters, Sonya Thompkins (Ronald), TaNeishia Conway (Marcus); 2 sons, Derrick Ross and Bobie Taylor, Jr.; 12 grandchildren Alehia Beaulieu (Terrance), Nytajah Taylor, Bri’Elle Taylor, Taylor C. Anderson, Derrick Ross Howard, Steven Daniel Jr., Ronald Thompkins Jr., Eric Thompkins (Christina), Robert Thompkins, Justice Taylor 20 great-grandchildren; one sister, Joyce Jones; one aunt, Bertha Evans; and a host of nieces, nephews, and cousins; devoted friends Kim Harris and Tyrus Edwards for all his special encouragement.

The family of Bobie Jean Taylor created this Life Tributes page to make it easy to share your memories.