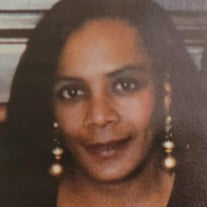 Beverley (Paulette) Gilchrist, 66, made her transition from this life on the morning of Tuesday, August 3, 2021, surrounded by love. She was born on August 13, 1954, in Baltimore, Maryland to Daisy Mae and Henry Llyod Gilchrist, who both preceded her in death. Beverley, was a life long citizen of Baltimore City and attended Winston Elementary, Herring Run Junior high school, and Northwestern High School where she pledged as a member of the Zino sorority. She attended Saint Paul Baptist Church, where she accepted Jesus Christ as her savior, early on. Her interests were drawing, sewing, and dancing. She and her brothers and sister were very close and enjoyed spending a lot time together as children. While punished, they would pass the time listening and dancing to the soulful sounds of WWIN radio. Beverley was comedian in her own right, who told jokes for money and by request, to her audience on the Caroline Street stoops. She and her sister Cathy sat on those front steps so much, that they were called the “Step Sisters”. Beverley landed her first a Job at Baltimore Gas and Electric Company, where she worked as energy services specialist for over 15 years. Following that career, Beverley accepted a human resources position with the local NAACP and would hold her high and proudly boast about it. It was at NAACP that she was nick named GG, Greedy Gilchrist, because as tiny as was, Beverley loved to eat! After retiring, she returned to working at the Food King Market just to stay busy. Family gatherings and Holidays were the highlights of Beverley’s life especially because she loved to cook and entertain. She didn’t hang out much but when she did you could find her hand dancing at Caton Castle. Her home was always filled with the sounds of her favorites like Franky Beverly, Anita Baker, Phyllis Hymen and Regina Bell. The Ruxton Avenue home was the gathering place for family and friends, and there was never a dull moment. Beverley was the “Mayor” of the neighborhood and would offer a meal, helping hand, her last dollar or even a spare room to anyone who needed it. She was loved by so many. In 2018, our Dear Beverley was diagnosed with Vascular Dementia which ultimately claimed her life. She was extremely well cared for at home by her children and family, but mostly full time by her son Dean, whom she called her “Rock.” The amazing staff of Seasons Hospice offered tremendous assistance which helped to make her comfort and care, easier. Beverley leaves behind to remember her legacy, a younger sister Cathy Gilchrist Royale, brothers, Henry Lloyd Gilchrist, Jr(Junie) and Sherill Daniel Gilchrist(Danny) both deceased, half siblings Jaqueline Crawford and Keith Gilchrist and step-sister Valerie D Kirkwood. Her beautiful children, Japonica Sha Bullock, Lakishna Nicole Lacherelle Gilchrist-Lewis, Dean Lloyd Bushrod, and Corey David Tucker. Her Beloved Grand-children, Dareya Briante’ nicknamed (Ganny), Kannan D’aire, Addis Myles Maurion, Kedrick, Ashley, Ka’Chad, Aishaya, Ke’Andre, Kavontez, Faith and Axel Tucker, one loving nephew, Darian Stovall, best-friend Rhonda Broady and a host of adored great-grandchildren, aunts, uncles, cousins, family and friends. From her loving relationship with John David Tucker “Ricky” (recently deceased), she gained bonus children Derek Tucker, Kim Tucker, Marche’ Templeton and John Tucker, Jr, whom she loved as a mom.

Beverley (Paulette) Gilchrist, 66, made her transition from this life on the morning of Tuesday, August 3, 2021, surrounded by love. She was born on August 13, 1954, in Baltimore, Maryland to Daisy Mae and Henry Llyod Gilchrist, who both preceded... View Obituary & Service Information

The family of Beverley Gilchrist created this Life Tributes page to make it easy to share your memories.

Beverley (Paulette) Gilchrist, 66, made her transition from this...

Send flowers to the Gilchrist family.