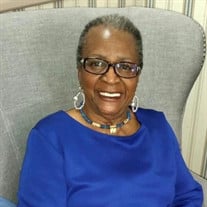 BESSIE MAE JACKSON was born June 5, 1935, to the late Albert Davis and Amanda Worthen in Jonesville, South Carolina. She died on August 1, 2021. She was affectionately called ‘Tidy’ by family and friends. Education was important to her. After coming to Baltimore, she worked and went to night school. She eventually went to Community College where she completed her nursing program. She immensely enjoyed working as a psychiatric nurse for children at Johns Hopkins Hospital. She retired from that job. Bessie was a traveling nurse for the Red Cross and a nurse at the penitentiary. Not part of her job, she gave Bible classes to inmates. Bessie married Theodore Jackson in 1955 and together they raised Deborah Ann. Elizabeth and Jerry were part of the family also. She has been a lifelong church member and served as an usher, Sunday school teacher and trustee. At Christian Life Church she served under her pastor, Dr. Hugh Bair. She was also a member of the Wednesday daytime Bible class taught by Pastor Marshall Prentice. She received an AA degree in Biblical Studies from Arlington Bible College. She believed the only reason to get more education was to be able to understand the Bible better. Bessie was ordained an Elder in Christ Church in August 1995. Bessie had a great love for Jesus the Christ and a strong desire to please Him. Traveling was a joy for Bessie. She traveled to Africa, Israel and Florida. Bessie has three close friends, Alice Ross, Yvonne Cross and Enid Clark. Playing Scrabble was a lifelong love. She wanted to win. Louella is the baby sister in Baltimore and she and Bessie had a close relationship. She kept in touch with her South Carolina sisters Lois and Ella. Her brothers, Robert William Davis and Albert, Jr. are both deceased. They all loved each other dearly. When Bessie set her mind on a goal, she was persistent, consistent, determined and dogged until she got the job done. She was a sweetheart, generous, kind and loving. She passed on her love of food to her daughter. Sweet potato pie was a special treat of mother and daughter. Her grandson Darryn was precious to her. He predeceased her. His daughter Jasmine was also precious to her. Jasmine was raised by great grandma Bessie for a few years. Missing Bessie are her daughter, Deborah and son-in-law, Wesley Farmer; daughter, Elizabeth Jackson, who predeceased her; sisters and brothers, Louella Brown, Lois and Ella Davis; two brothers who predeceased her, Albert and Robert Davis; three grandchildren, Darryn (deceased) Pamela and Mark Jackson and seven great-grandchildren, Jazmine, Andre (deceased), Markia, Adeara, Shatera, Kendall and Timothy. Bessie leaves three great-great-grands, Jade, Breon and Noah. She leaves many nieces, nephews, cousins, coworkers, church members, and family and friends to mourn and miss her.

BESSIE MAE JACKSON was born June 5, 1935, to the late Albert Davis and Amanda Worthen in Jonesville, South Carolina. She died on August 1, 2021. She was affectionately called &#8216;Tidy&#8217; by family and friends. Education was important... View Obituary & Service Information

The family of Bessie Mae Jackson created this Life Tributes page to make it easy to share your memories.