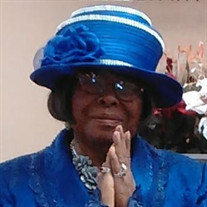 The Beginning Bertha Jean Bluford, daughter of Needum and Cathline Lewis-Sutton was born on December 4, 1945 in Goldsboro, North Carolina. Bertha was the middle child of her siblings. Bertha gained her wings and transitioned from earth to glory on Saturday February 19, 2022, to join her mother, father, and husband in glory. Bertha was a “Mother amongst Mothers” whenever you came into contact with “Sister Bertha” she would always greet you with her famous bear hug. By the way, she gave the best hugs, and whenever she would release you. You always felt better, for she had so much love to give wrapped up in her gigantic bear hugs Bertha attended school in Goldsboro, N.C. until the eighth grade, shortly after that she journeyed to Baltimore, Maryland with her children, where she met her husband Houston Bluford with her four children and one on the way. Bertha worked numerous jobs to help support her family, she would often tell us how she once worked on back of garbage truck in which we found interesting. For nothing stopped our “Mom” from taking care of her children alongside our dad. Bertha loved to travel with her best friend Judy Maddox, she had the opportunity to go on several cruises to the Bahamas, as well as other destinations such as Canada, Detroit-Michigan, Martha Vineyards, New Jersey, New York City, Las Vegas, San Francisco, South Carolina. Bertha enjoyed going to amusement parks and traveling with the church. Bertha love to bowl, many may not know it, but she was on a bowling league, not to mention she was an awesome cook. Bertha loved fellowshipping With her family and friends and eating catfish nugget, lake trout, greens, And potato salad, and do not forgot her trip to Chipotle. Bertha was a covenant believer who accepted Jesus Christ as her personal savior. She was always a spiritual prayer warrior, a church! Church going woman, with a determination to live for Christ! She was a member of Southern Baptist Church for many years, then in 1986 she joined El Bethel Prayer Tabernacle under the auspices of Apostle Joan B. Sanders Bertha was well known in ministry as an alter worker, choir member, prayer warrior and usher. Whenever Bertha would come marching down the aisle, the church would wait in anticipation for her “sharp turns around the corner of the pews” as she marched like a soldier in the army of the Lord. Oh how she took pride in serving in the house of the Lord. Bertha served under the auspices of Apostle Joan B. Sanders for over 30 years, upon leaving the State of Maryland in 2017 she attended Abundant Life Church International until 2019 as she traveled back home. The pandemic did not stop Bertha from traveling to the house of worship. Bertha continued her final journey at Inner court Ministries, under the Leadership of Bishop Jonathan Wallace, Sr. until her demise As we “Reflect on the Life of a Hugger” what comes to mind from the heartbeat of her family is that Bertha was a protector of her family and had a tremendous love for her friends. Bertha’s famous quote was “I m blessed by the best with no stress.” The Conclusion Bertha leaves to Celebrate Her Life” – Brother: Billy Jackson, Children: Gwendolyn Wellington, Michael Wellington (Angela), Verler Chambers, Randy Wellington, Sr. Cathy Tooles (Rochell), Grandchildren: Tavon Chambers, Shaunika Burris, Sharonica Burris, Steven Woodrup, Jr. Jeremiah Savage, Stephon Woodrup, Tiana Mitchell, Randy Wellington, Jr. Great-Grandchildren: Tanay, Tre’jour, Travon, Javon, Scion, Shaniya, Dovonte, Sean, Jeremaih, Jr. Layla, Ruby, Kynlee, Nieces & Nephews: Christine Cannon, Rossie Cannon, Jr. (Renee) Courtney Haighler, Lisa Rivers, William Fortune, Jamal Gaines, Chris Frazier, and a host of family and friends.

The Beginning Bertha Jean Bluford, daughter of Needum and Cathline Lewis-Sutton was born on December 4, 1945 in Goldsboro, North Carolina. Bertha was the middle child of her siblings. Bertha gained her wings and transitioned from earth to glory... View Obituary & Service Information

The family of Bertha J. Bluford created this Life Tributes page to make it easy to share your memories.

The Beginning
Bertha Jean Bluford, daughter of Needum and Cathline...

Send flowers to the Bluford family.