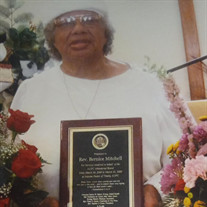 BERNICE J. MITCHELL was born August 22, 1934 to the late Mr. and Mrs. Shirley and Elmira Nixon. She departed this life on January 12, 2022. Bernice received her education in the Rancocas Public School System in Mount Holly, New Jersey. At an early age, she gave her life to the Lord and joined her grandfather’s church, Rising Sun Fire Baptized Ministry. Shortly thereafter, Bernice met army serviceman Eugene Mitchell of Louisville, Kentucky; they married on March 23, 1952. They then traveled to Germany, France, Vietnam and other countries. Throughout his term, four children were born, Eugene, Michael, and twins Steven and Richard. After fnishing his twenty-two and a half year term, they decided to settle in Baltimore, Maryland. Nine years later a little girl, Elmira was born, affectionately known as “Princess”. Minister Mitchell loved to cook and bake. She was well known for her sugar cookies and delicious pound cakes. She also hosted community outreach dinners on Thanksgiving and Christmas at her church and at the Veteran Rehabilitation Center in Baltimore. In her prime years, Minister Mitchell and her family joined the St. John Alpha & Omega Pentecostal Church under the leadership of the late Rt. Rev. Magdalene Phillips, where she was ordained as a minister and she continued to serve under Bishop Stanley Cruse. Minister Mitchell loved to pray. She became President of the Universal Prayer Band, an organization dedicated to prayer. They would pray for the sick and shut in and also for other prayer requests that they received. In her later years, she transferred her membership to the Regeneration Alpha & Omega Pentecostal Church under the leadership of Pastor Wanda Walker, where she served faithfully as long as her health permitted. Bernice loved her grandchildren and great-grandchildren. They were the apples of her eye. She always prayed for their success and for their relationship with the Lord. Bernice leaves to celebrate her life: two sons, Eugene and Steven Mitchell; her daughter and son-in-law, Elmira and Steven Wise; daughter-in-law, Rebecca Mitchel; six grandchildren Darnell Jones, Sean Mitchell, Arielle Mitchell, Danielle Mitchell, Elder Steven Mitchell Jr. and Pastor Dominic Mitchell; eighteen great-grandchildren; her brother and sister-in-law, Donald and Lillian Nixon; two nieces, Donita and Sharon Maytt; and one nephew, Eric Rasado; godchildren, Denise Dafaemekpor and Anthony Wilder Sr.; loving sister, Crawley; devoted caretaker, Maria Roseman; and her loving Pastor, Rev. Wanda Walker.

BERNICE J. MITCHELL was born August 22, 1934 to the late Mr. and Mrs. Shirley and Elmira Nixon. She departed this life on January 12, 2022. Bernice received her education in the Rancocas Public School System in Mount Holly, New Jersey. At an... View Obituary & Service Information

The family of Bernice Mitchell created this Life Tributes page to make it easy to share your memories.

Send flowers to the Mitchell family.