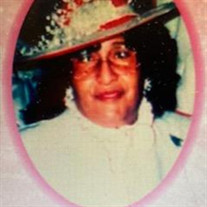 On October 15, 2021 BERNICE GAYLORD answered the Master’s call and quietly and peacefully took her eternal flight home. Her last words to her daughter were to make sure she told “everybody she loved them.” Bernice, who was lovingly known as “Bert”, was born on September 29, 1921 in Plymouth, North Carolina. Her parents were the late Ida and Carter Basnight. Bernice spent her formative educational years in the Macedonia Public School System. She would graduate from J.J. Clemons High School in Roper, North Carolina. Not only was her formal education an important part of her life, but her spiritual life was also significant. She received Christ as her Savior at an early age and united with Macedonia A.M.E. Zion Church. Her love for Christ and the Church motivated her to participate and serve in many different youth activities. Her Christian service continued after she relocated with her husband and family to Baltimore, Maryland in 1942. After attending various church services, she decided to make New Pleasant Grove Missionary Baptist Church under the leadership of Pastor Robert L. Haynes her church home. Bernice joined and served as a longtime active and dedicated member of the Pastor’s Aide Ministry. “A wife of noble character who can find? She is worth far more than rubies.” - Proverbs 4:7 (KJV) Bernice met and fell in love with Thomas Gaylord, Jr. They were united in holy matrimony on August 24, 1940. From this union, five children were born. Bernice’s husband (Thomas); two children; one grandson (Jamal Gaylord); and, one son-in-law (Howard Johnson) preceded her. Bernice became the Homemaker Extraordinaire and provided a loving and nurturing environment in which to raise her children. She was family oriented and saw that her home was a safe and comforting place for her husband and children. She had excellent culinary skills and would make delicious meals for her family. In addition, she provided those tasty meals for other children as well. Not only did Bernice have the skill for making meals scrumptious, she also had the skill for creating beautiful floral arrangements. This was a self-taught skill. Her floral arrangements would decorate her home and the homes of neighbors, family and friends. Moreover, Order of Service Bernice was a self-taught seamstress. She had a gift for creating beauty in all of her surroundings. Bernice had a special love for music and it was an integral part of her life. She loved singing and attended various churches. She would often be seen singing on their choirs. And, she organized a singing group called the Bayton Specials. This group would also travel to different churches, singing to the glory of God. Bernice was known for her compassion and concern for others. She would phone family members and friends to check upon them. Bernice loved to send greeting cards. At any given moment you could receive a card to say happy birthday, express sympathy, or just to say hello. Her motto was, “If I could help somebody along the way then my living would not be in vain.” Bernice Gaylord leaves with precious memories of her life on earth: two daughters, Cleo Jean Gaylord-Johnson (Howard) of Baltimore, Maryland and Patricia Gaylord-Johnson (Joseph) of York, Pennsylvania; son, Darnell Lamont Gaylord of Norfolk, Virginia; three grandsons, Brandon Johnson of York, Pennsylvania, Hadji Gaylord of Norfolk, Virginia and Eric Palmer of Baltimore, Maryland; three granddaughters, Melissa Nichols of Boston, Massachusetts, Danielle Gaylord of Norfolk, Virginia and Brianne Johnson of York, Pennsylvania; eight great- grandchildren; devoted sister, Mildred Tharps of Gwynn Oak, Maryland; sister-in-law and brother-in-law, Mary Williams (Herman) of Jamaica, New York; and, a host of nieces, nephews and cousins. Continue to dance to the music! “Jesus said...I am the resurrection, and the life: he that believeth in me, t

On October 15, 2021 BERNICE GAYLORD answered the Master&#8217;s call and quietly and peacefully took her eternal flight home. Her last words to her daughter were to make sure she told &#8220;everybody she loved them.&#8221; Bernice, who was... View Obituary & Service Information

The family of Bernice Gaylord created this Life Tributes page to make it easy to share your memories.

Send flowers to the Gaylord family.