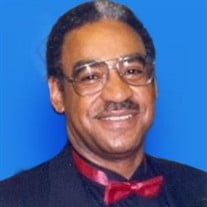 Bernard Eugene Garnes was born December 30, 1939, in Warrenton, North Carolina to the late Bernard Garnes and Ella Alston. He received his wings on September 2, 2021. Bernard was affectionately known as "Genie", "Big Dog", and "Big Poppa". Bernard attended Baltimore City Public Schools graduating form Frederick Douglass Senior High School #450. His life was a testament to the school's motto of: "Continuing the Tradition with Pride, Dignity, and Excellence" Bernard was employed with the City of Baltimore, Department of Public Works, where a critical responsibility was supervising the construction of Interstate 83 expressway (I-83). The reason this work was so vital to the city of Baltimore: The Jones Fall Expressway is a 10.2-mile long freeway that carries I-83 from downtown Baltimore to the northern suburbs. It is the area's true north-south artery because I-95 runs mostly east-west through the city. Thank you, Bernard, for making our commutes in that part of the city so much more convenient! Bernard was employed as a steelworker at Bethlehem Steel Plant. He was also employed with the United States Postal Service. He was recognized and awarded the United States Postal Service Award for 23 years of dedicated service as a mail carrier. Bernard served in the United States Army (Service Component Command) directing United Stated Army Operations throughout the United States; he received Decorated Commendations as a Sharpshooter in weaponry, a challenging qualification to earn. Bernard loved the Lord. Being present for church services was a great source of strength and enjoyment for Bernard. He regularly attended services until his failed health prevented him. Bernard married his true love and partner for life. Josephine Murdock-Garnes. As a husband and father, Bernard was caring, dedicated, compassionate, dependable, reliable, protective and a wonderful provider for his family. Bernard was a serious, yet fun-loving man. He was known to be benevolent, hardworking, supportive, gregarious, determined, strong willed and a jack of all trades, master of many. Bernard had a heart of gold, and he never met a strange. A fine specimen of a man, Bernard was a sharp and meticulous dresser who always looked GQ fabulous. Bernard was famous for saying, "LIFE DOESN'T OWE ME ANYTHING, BECAUSE I LIVED LIFE." An avid reader, he enjoyed staying abreast of current and world events. Bernard loved photography and videography; he took great pride in capturing and memorializing important moments at weddings and other family events. As an outdoorsman, Bernard enjoyed horseback riding, fishing, and boating. In addition to captaining his own boat, he was a member of the Pleasant Yacht Club for over 25 years. His love of fishing often resulted in him returning from a fishing trip with coolers filled with enough catch for a fish fry. The fish fry's were a special treat enjoyed by his family and friends. Fishing and boating were hobbies that brought exhilaration, happiness, and pure joy to Bernard. Bernard was proceeded in death by three brothers; Charles, Herbert, and Milton Garnes. Bernard leaves to cherish his life: His loving and devoted wife Josephine Murdock- Garnes, three sons; Kevin Owens, Steven Eugene Garnes, David Yarrough, two dauhters; Tina Marie {Kevin} Hill, Marquita Nyeisha Garnes, one brother; Alfred {Helen} Garnes, one sister; Patricia Gibson, one uncle; Jackie {Bert} Garnes, three grandchildren; Melita, Rochelle and Nicole Garnes, Great grand; Aliyah Garnes, a host of nephews, nieces, cousins and friends.

The family of Bernard E Garnes created this Life Tributes page to make it easy to share your memories.

Send flowers to the Garnes family.