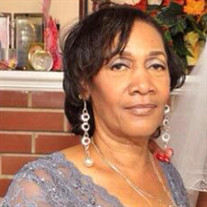 Bernadette Philomena Ford (Crockett), affectionately known as “Cookie”, daughter of the late John Lee and Mary Agnus Ford, was born on February 26, 1951 at Baltimore City Hospital in Maryland. Lovingly surrounded by her husband, daughters, grandkids & great grandkids, she peacefully ascended from life on May 15, 2021 after living a wonderful 70 years of life. Cookie was the second oldest of five siblings. As a baby, she was baptized at Saint Peter Claver’s Roman Catholic Church on April 29th, 1951. She was raised in church and received her early education thru the Catholic schooling system. Later she transferred into the Baltimore City school system and graduated from Forest Park High School. Cookie furthered her education at Baltimore City Community College studying Early Childhood Development. She met the love of her life Frankie while in high school and they fell in love and got married and from this union four beautiful daughters were created. Cookie started working as a School Teacher educating preschoolers. She later found her career path working at GBMC educating young mothers from the inner city. She retired from GBMC to work and eventually started doing daycare. Cookie loved helping and educating kids of all ages and everyone that encountered her loved her. She also enjoyed endless shopping, gardening, reading books, going to church and especially being around family. Cookie enjoyed spending time with her husband Frankie, especially attending the Summer Soul Jam Concerts together every year. She also loved when he would sing to her and at every event, they would show off their hand dancing skills and capture everyone’s attention. Cookie’s favorite time of the year was always the holidays, especially Christmas, she would always wait until the coldest day in history to decorate outside. Everyone knew that when Snoop’s “Drop It Like It’s Hot” came on, she was going to get up and dance as that was one of her favorite songs. Preceding her death are: one daughter, Renita Crockett; one foster son, Edward Blake; two brothers, James Ford Sr. and John Ford Jr.; and several other family members and friends that are gone, but not forgotten! Although Cookie will be greatly missed by her family and friends, we thank God for the lives she was able to touch. As a loving wife, mother, grandmother, great grandmother, sister, aunt, cousin and friend, Cookie leaves to treasure her memory: her loving husband, Franklin Crockett; three daughters, Francene, Jessica & Veronica (Peachie Pie); one bonus daughter, Denise; two son in laws, Derek and Charlie; nine grandkids, Da’Nekia, Ra’Shauna, Derek, Ahriyah, LaTanya, MaKayla, Charles, Christian & Lil Charlee; four great grands, Amari, Aubri, Bella and Brooklyn; one baby brother, Bernard Ford; one nephew, James Jr. (Nachelle); five sister in laws, Anita Ford, Sylvia Crockett, Doreatha Reid, JoAnn Whitfield and Naomi Sembly; and a host of other relatives and friends that cherished her dearly.

The family of Bernadette Philomena Crockett created this Life Tributes page to make it easy to share your memories.

Send flowers to the Crockett family.