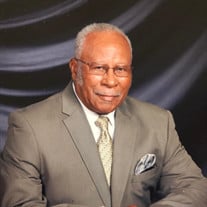 BENNIE GRISSOM is the eldest of twelve children born to Floosie and Bennie Louis Grissom; Ollie, Franklin, Lottie, Mertyl, Bettie, Bobbie,Leroi, Willie, At age elven , he accepted Christ and was baptized into the Haywood Baptist Church in Louisburg, North Carolina and remained a member there until he moved to Baltimore and joined Zion Baptist Church on September 29,1957. He attended pubic schools in Franklin County and continued his education in Warren County, NC where he also met Laura Ella Powell to whom he married and had three children; Ella Juanita Taylor, Bennedean Faye Harvery and Wayne Keith Grissom 1. Deacon Grissom completed a tour of duty with the US Army and was Honorably Discharged after serving in the States and in Germany where he also spent time as a boxer. An employee at Esskay Meats for thirty three years, he was forced to retire on disabilty due to injuries he endured in an accident. In order to learn more about God's Word, he attended Church School, Daytime Bible Study and other workshops. He sang with the Voices of Zion, worked with Food Pantry, Christians on Patrol and Safe Haven Network. He also served as a Deacon for many years and retired emerita. He enjoyed sports having played football and baseball in High School, boxing while in the Army. He also played baseball with the Lelite Giants Baseball Club in Baltimore, traveling with the team to play and raise funds for the club's little league team. He sang with the Christian Crusaders, a community choir that traveled the east coast. He also enjoyed fishing ,hunting, and spending time with his family. In addition to his full time job, he worked in home improvement, using his self taught skills for many people in Baltimore, Maryland. He was an avid gardener, and known to be generous with his annual crops of green beans, cabbage, collards, tomatoes, squash, and corn among other fruits and vegetables. His favorite scripture is 1 Corinthians 13 and his favorite Hymm is "Jesus Lover of my Soul.' He was preceded in deth by all elven of his siblings, his wife Laura, and his son Keith. He leaves behind to mourn, three daughters; Juanita, Faye, and Erika Pulley; five grandchildren, Bettina Judd, Justin Harvey, Bryan Harvey, Teyah Hart and Wayne Keith Grissom 11; two great-grandchildren Zyla and McKenzie; sister-law, Linda Grissom, Barbara Grissom, Philomena Grissom, Della Grissom, Margaret P. Alston, Gracye Johnson, Vanessa Hall-Eliss and a host of nieces, nephews, cousins, friends and friends who are family

The family of Bennie Grissom created this Life Tributes page to make it easy to share your memories.

BENNIE GRISSOM is the eldest of twelve children born to Floosie...

Send flowers to the Grissom family.