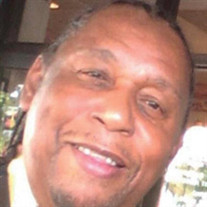 Today we celebrate the life and legacy of our beloved BENJAMIN HERBERT. Benjamin entered this life on August 27, 1945 and was called home to be with the Lord on January 11, 2022. Benjamin was the seventh of ten children born to the late Brother Charles Herbert and Mother Carol Herbert. Benjamin received his early Christian development at the First Apostolic Church under leadership of the late Bishop Winfeld Amos Showell. He was baptized in Jesus’ name and received the gift of the Holy Ghost at a young age. Benjamin was educated in the Baltimore City Public School System. He earned his Associate of Arts degree from the Community College of Baltimore City. Benjamin bravely served his country in the United States Army during the Vietnam War. He was awarded the Purple Heart for being wounded. He received the Bronze Star Medal for Meritorious Achievement in ground operations against hostile forces and later received a special commemoration from President Barack Obama. Benjamin was honorably discharged in 1967. Benjamin was very patriotic and proudly displayed his military experience. He sustained his relationships with his life-long, veteran friends at the V.A. (Veterans Administration). Early in his life, he was employed at the General Refractories Company and the Maryland Drydock Company. He later worked at the United States Postal Service until he retired as a dedicated and reliable mail delivery truck driver. In 1964, Benjamin met and fell in love with Shirley Kinlaw, and they were joined together in holy matrimony on July 4, 1969. Benjamin A. Herbert Sr. was born from this union. Benjamin affectionately known as “Big Benny” loved fishing, hunting, music, sports and eating delicious food. He was a great storyteller who could bring out the humor in any situation. He was naturally witty and very expressive, which made it easy to love him and hard to forget him. Benjamin had a “big heart” and he generously shared whatever he had with his friends and anyone expressing a need. Benjamin understood the power of prayer and trusted God as he faced life’s toughest challenges. He left indelible mark on our lives, and he will remain in our hearts forever. He will be dearly missed. “I fought a good fight, I have finished my course, I have kept the faith.” 2 TimoThy 4:7 He leaves to cherish his memory; his sons, Benjamin A. Herbert, Sr. (Niccole Y. Herbert) and Steven D. Johnson; his grandsons, Benjamin A. Herbert, Jr., Brandon A. Herbert and Kyle T. Johnson; his granddaughters, Brea A. Herbert, Kamryn M. Ingram, and Kelsie D. Ingram; his great-grandsons Joshua Herbert, Amari Herbert, Mahki A. Gaskin, and Tyree J. Gaskin; one great-granddaughter Brynn A. Herbert; one brother Charles Herbert II (Ernestine); two sisters Christine Herbert-Barnes and Carolyn Herbert-Butler and a host of nieces and nephews, cousins, and friends. He leaves to join his parents Charles and Carol Herbert, and his siblings James, Betty, Joseph, Horace, Leroy, and Gloria Herbert.

Today we celebrate the life and legacy of our beloved BENJAMIN HERBERT. Benjamin entered this life on August 27, 1945 and was called home to be with the Lord on January 11, 2022. Benjamin was the seventh of ten children born to the late Brother... View Obituary & Service Information

The family of Benjamin Herbert created this Life Tributes page to make it easy to share your memories.

Today we celebrate the life and legacy of our beloved BENJAMIN...

Send flowers to the Herbert family.