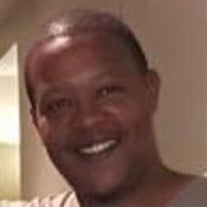 Obituary For Benjamin A. Gardner Sr. Benjamin Augusta Gardner Jr. was born on July 1, 1974 in Baltimore, Maryland to Ruth Kennedy and the late Benjamin Augusta Gardner Sr. He department this life Thursday, April 14, 2022. Benjamin received his education in the public schools of Baltimore City. At an early age he develop a love and passion for music, designer clothes and shoes. He spent most days mastering his skills creating beats and working with some of Baltimore's most known Artist such as Backland and T-Mac. Benjamin was also a well-known DJ they called him “Ben Around World” that played at various parties and weddings. If you lived on Fulton Ave. you could hear his loud music through his open bedroom window on most days. Benjamin loved his family especially his mother and Nephew “Mike” these two were inseparable. If you see one the other one wasn’t too far behind. One great nephew who is his twin and stole his heart “Devren” He had numerous friends one who also proceeds him in death “Eddie” and one who became like a brother “Quincy” No matter where he went he was loved and will sincerely be missed by everyone who knew him. He is preceded in death by his dad Benjamin Gardner Sr.; Sister Carrie Mae Kennedy, Two Aunts Theresa Hilton and Andretta Harrison. Benjamin leaves to cherish his memory: Mother Ruth Kennedy, Sister Linda Coston, and Brother Frank Kennedy Jr., Brother in Law Henry Coston Jr, Sister in Law Josette Brunson, Four Aunts Virgiree Pendergrass, Mildred Rouse, Cynthia Snyder and Susie Murray, Two Uncles Lun Houston and Truman Houston all from various areas of South Carolina. 6 Nieces Sharelle, Anndraya, Ciara, Ebony, Tameka and Shardai, 3 Nephews Mike, Desmond and Dominique. 9 Great Nieces, 7 Great Nephews, 7 Great-Great Nieces, 7 Great-Great Nephews and a host of other relatives and friends.

The family of Benjamin Augusta Gardner created this Life Tributes page to make it easy to share your memories.

Obituary For Benjamin A. Gardner Sr.

Send flowers to the Gardner family.