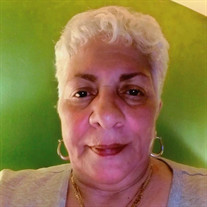 Barbara Bennett was born October 28, 1948 in Boston, MA to Leroy and Norma Bennett. Barbara was the baby of the bunch, coming on the heels of her older brothers, Bruce and Ricky Bennett. Early in life, Barbara relocated to the lower east side of Manhattan where she spent the majority of her life. In high school, she was a Candy Striper studying to be a dietician. After graduating from Washington Irving High School, Barbara was quick to get to work! She continued working as a Candy Striper for 5 years until her first son was born. She also worked as a contractual/on-call babysitter and senior care assistant in her area alongside other various jobs. Eventually, she found her career stride working in the food service industry which she pursued for over 15 years. Due to some unforeseen circumstances, Barbara was unable to continue working in food service. Sad as she was to leave the industry, this allowed Barbara to go back to doing something she truly loved, babysitting. She continued to babysit for the next 10 or so years for family and friends throughout Co-Op City in the Bronx. Barbara met her first husband, Anthony Larkins, at the age of 18 in 1967. Together they had two sons, Dominick and Christopher Larkins. In 1974, she met Cornelius Jacobs with whom she had a third son, Steven Bennett. In 1987, Barbara met her late husband Edward (Ed) Cooper. Barbara shared a loving and happy marriage with Ed until his passing in December 2015. Barbara loved the holidays but she especially loved Christmas as she reveled in putting up decorations, watching Christmas movies and just the pure ambiance the holiday brought. Barbara is survived by her sons, Dominick, Christopher and Steven; Brothers, Bruce and Ricky; Aunt Phyllis Bennett; Sister-in-law Frances Bennett (Bruce); Two daughter-in-laws, Mei Sin Wong-Larkins and Janelle Watson-Bennett; A host of grandchildren, Chelsea Bennett-Lugo and her husband, Dixon Lugo, Justin Thomas, Jazmin Bennett, Stephanie Bennett, Riley Larkins and Keaira Sky Larkins; Great-granddaughter Blossom Bennett. Barbara was very excited to be welcoming another great-granddaughter in March. She also loved her pets; Bailey, Bella and China Bennett, Elvis and Elizabeth Larkins. Alongside her immediate family, Barbara leaves behind various family and friends that will miss her dearly.

Barbara Bennett was born October 28, 1948 in Boston, MA to Leroy and Norma Bennett. Barbara was the baby of the bunch, coming on the heels of her older brothers, Bruce and Ricky Bennett. Early in life, Barbara relocated to the lower east side... View Obituary & Service Information

The family of Barbara A. Larkins created this Life Tributes page to make it easy to share your memories.

Send flowers to the Larkins family.