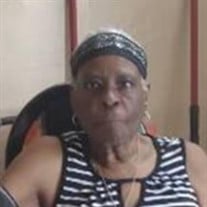 BARBARA MAE WORRELL-HOPKINS, aka Bobby, Ma, and Grandma to many, was born in Baltimore Maryland to the late Thelma Geneva Brown and Clarence Eugene Braxton on June 6, 1941. Bobby was educated in the Baltimore City Public School System. Her favorite school was #181 which was the old Douglass school. She talked about that school quite often. Bobby went on to receive her high school diploma at the age of 60. She was a very strongwill-minded and a determined person. Bobby worked several jobs before she found her passion in nursing, and she became employed at Pleasant Manor Nursing Home located in Baltimore, Maryland. She was employed at Pleasant Manor for over 40 years before she semi-retired. During her semi-retirement she worked at Genesis Nursing Home and did private nursing until she fully retired. Bobby loved music and singing. She sang on the church choir at New Elizabeth Baptist Church where she was a member for 30 plus years. Bobby met the love of her life Wilson Worrell whom she married, and from that union three sons were born, Tyrone Edward Braxton, Wilson Worrell III, and the late Darryl Stevenson Worrell, and a daughter Shirlene Anita Worrell. She leaves to mourn: four brothers, Eugene Edward Braxton, Michael Leon Braxton Sr., Karl Nathaniel Braxton and Marlo Delicta Braxton; sister, Toni Tamara Braxton; four sisters-in-law, Diane Braxton, Joanne Braxton, Terry Braxton and Deborah Braxton (sisters-in-law Nancy Braxton and Karen Braxton and daughter-in-law Nancy Worrell preceded her in death). She also leaves over one hundred and fifty grandchildren, great-grandchildren and great-great-grandchildren, whom she named half of them; grandson-in-law, Darnell A Worrell; adopted granddaughter, Ana Alleyne; a host of nieces and nephews; three adopted sons, Paul Williams, Gregory McCloud and Jonathan Smith; her best friends, Charlene Davis of 58 years, Deborah William who was more like a sister, and Joseph Holland who was more like a brother; special friend, Shawn Fallins; her dog, MJ; and a host of other relatives and friends. Bobby later married the late Edmund Hopkins. She peacefully departed this life on April 8, 2022 at hers and her daughter’s home.

BARBARA MAE WORRELL-HOPKINS, aka Bobby, Ma, and Grandma to many, was born in Baltimore Maryland to the late Thelma Geneva Brown and Clarence Eugene Braxton on June 6, 1941. Bobby was educated in the Baltimore City Public School System. Her favorite... View Obituary & Service Information

The family of Barbara Mae Hopkins created this Life Tributes page to make it easy to share your memories.

BARBARA MAE WORRELL-HOPKINS, aka Bobby, Ma, and
Grandma to many,...

Send flowers to the Hopkins family.