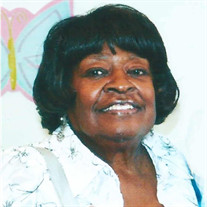 Barbara Rogers Hayes was born November 7, 1931 in Wilmington, North Carolina to the late Augustus Rogers and Annie (Tucker) Rogers. Barbara went home to be with the Lord on February 21, 2021. Barbara met her late husband Gerald Hayes in Baltimore, Maryland, they dated for some time and were married December 26, 1957. Their family grew October 18, 1962 when Mandell was born. Barbara was a loving and devoted mother even through Mandell's untimely death on May 22, 2019. She and Mandell had an unbreakable bond and loved each other unconditionally. Barbara attended school in Wilmington, North Carolina and graduated from Williston High School in 1949. Not long after graduating, she moved to Baltimore, MD to attend Cortez Peters Business College graduating in 1951 where she earned her Business Degree. She then attended Morgan State University for two years. Barbara furthered her education by attending Lincoln University graduating in 1986 earning her Masters’ Degree in Human Services. Barbara worked at the American Red Cross for 34 years holding several positions from Dictaphone Operator/Stenographer in 1952 to Clerical Support Supervisor when she retired in 1986. She briefly worked for Family & Children’s Services as the Program Coordinator at Kirkwood Senior Apartments until retiring from there in 1992. While working at the American Red Cross she volunteered at the Baltimore City Study Center as a tutor from 1958-1959, Baltimore Urban League Guild as treasurer from 1963 to 1967 and Baltimore City Schools PTA as Vice President, Secretary and Treasurer. Barbara accepted the Lord Jesus Christ as her Savior and was a faithful and long-standing member of John Wesley United Methodist Church. She attended regularly until her health began to fail. Barbara was preceded in death by her husband, Gerald Hayes; son, Mandell Hayes; brother, Edward Rogers, Sr.; and sister, Augusta Underwood. She leaves to cherish her memories children from her blended family with Gerald Hayes, Lenora, Lamont and Wanda; 7 grandchildren, Gendell (special grandmother/motherly bond and caretaker who spent time watching over and caring for her GiGi), Quartnee, Marissa, Terron, Xionna, Toya and William; 6 great-grandchildren, Diamonté (her first-born great grandson in which she shared a special bond), Shamirah (her first-born great granddaughter in which she shared a special bond), Chase, Khori, Anika and Kenzie; nieces, Helyn (Jimmy), Sandra Gayle (Jimmy); nephew, Ivan (Angela); niece, Maxine; goddaughter, Jaydé; sister-in-law, Gloria Ratliff (friend and confidante); along with a host of nieces, nephews, cousins and extended family and friends from Baltimore, MD; Wilmington, NC; Atlanta, GA and Hampton, VA. Barbara loved her family immensely and enjoyed spending time with them. She was a great cook who loved to host and entertain family and friends. She was a devoted wife, mother, grandmother, aunt, cousin and friend. She will truly be missed by all.

The family of Barbara Rogers Hayes created this Life Tributes page to make it easy to share your memories.