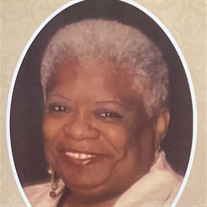 BARBARA VICTORIA BROWN COAD-DINKINS, daughter of the late Richard and Doretha Brown was born on November 27, 1946 in Baltimore, Maryland. She departed this life peacefully on March 11, 2022. Barbara was educated in the Maryland School System. She graduated from Dunbar High School in 1964. Barbara began her career at Mercy Hospital where she was employed for over 25 years in the billing department. In the year of 1987, Barbara married David Dinkins. They shared many memories together. During their union together they founded and owned Bowley’s Roofng Company. Barbara was the frst woman and minority to own a roofng company which she took great pride in. Upon her retirement Barbara and David moved to Sumter, South Carolina to enjoy the peace and tranquility of Southern living. “Nana”, as she was affectionately called by her grandchildren, was known for hosting all the family cookouts. She made sure everyone felt welcomed at her home. Barbara was also known for her famous spaghetti. It was always a requested dish for many family occasions. Barbara had a love for nice things, one being jewelry. She also made sure her nails were on point and looking great! Barbara was a loving and caring person, always ready to lend a helping hand when needed. She will be sorely missed. Barbara was preceded in death by her husband David Dinkins, and three brothers Sylvester Brown, Richard Brown and Nathaniel Brown. She leaves to cherish her memory: her children, her son Joe Evans and daughters Develle Price, DaeNeille Wells, Yvette Dinkins and Latachia Dinkins; daughter-in-law, Ronda Evans; two sonsin-law, Maurice Price and William Wells. She is also survived by her sisters, Joan Shaw, Brenda Melvin, Doris Toller and Charlene King; brother, Eugene Brown; eight grandchildren, seven greatgrandchildren, and a host of nieces, nephews, cousins and friends. Barbara also leaves her closest friends, Janie Osbourne, Linda Wilson, Tony Brew, Rosalie Stubblefeld, Ms. Diane; and a special friend, Isaac English.

BARBARA VICTORIA BROWN COAD-DINKINS, daughter of the late Richard and Doretha Brown was born on November 27, 1946 in Baltimore, Maryland. She departed this life peacefully on March 11, 2022. Barbara was educated in the Maryland School System.... View Obituary & Service Information

The family of Barbara V Coad created this Life Tributes page to make it easy to share your memories.

Send flowers to the Coad family.