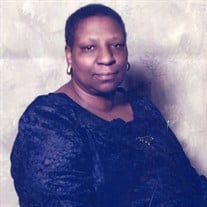 AUGUSTINE REBECCA PETTUS JENNINGS, daughter of the late John Reade Pettus and Mussethel LeGrand Bond, was born November 3, 1942 in Baltimore, Maryland. She departed this life on March 15, 2021. Augustine received her early education at the Elementary School #110. Later she attended School #452. After graduating, she went on to Carver Vocational Technical High School, from which she later graduated. Sister Jennings was a member of the Zion Hill Missionary Baptist Church located at Gilmor Street and Lafayette Avenue. She sang on the Gospel Choir there for many years. During these years she was also a member of a gospel group known as The Pathway To Heaven Gospel Singers. She sang with them throughout Baltimore, Maryland, in New York, Delaware, North Carolina and many other states for years. She later met and married Joseph O. Jennings Sr. on June 27, 1964. From this union two sons were born, Joseph O. Jennings Jr. and Antonio O. Jennings. For many years they both continued to sing with The Pathway To Heaven Gospel Singers. Further, Sister Jennings was a member of other various gospel groups and choirs known around Baltimore City. She sang with The Corinthians Gospel Singers, Brother Leroy Caesar and the Voices of Praise, The Sanctuary Choir at her church, Liberty Grace Church of God and the Heaven 600 Choir. In 1975 Augustine became a full-time employee for the Housing Authority of Baltimore City. She was employed there for 29 years until her retirement on August 6, 2004. She worked under the umbrella of the Division of Family Support Service. She started as a Resident Aide, working with The Adult Medical Day Care Centers, The Shelter Housing Programs, and later in her career she was promoted to a Counselor One position still working with the elderly as a Social Worker. In 1977 Sister Jennings joined the Liberty Grace Church of God at 3400 Copley Road, Baltimore, Maryland 21215, where she had been a member for many years. While there she was a member and secretary of The Missionary Board, and she was one of the lead singers on the Sanctuary Choir. She was one of the instructors who taught in the Vacation Bible School Sessions, Bible Study and Prayer Meeting Night Service. Sister Jennings was also the Mistress of Ceremony for the Flower Circle Anniversary and Musical Luncheon for many years. As the years progressed, Sister Jennings began to seek a higher education. So, in June 1986 she was awarded a Certificate in Gerontology, and by June, 1989 she was awarded her Associate of Arts degree. Both awards were in the areas of Gerontology. She received these awards from the Community College of Baltimore, now known as BCCC. Tina, which was her nickname, was thirsty for an education and continued to press her way. In May, 1991 she was awarded her Bachelor of Science degree in Social Work. In addition, in May, 1995 she was awarded her Master of Science degree in Transportation along with completing her Master’s Thesis. All of this was achieved upon her completion of her programs at Morgan State University. Sister Jennings leaves to cherish her memory: her two sons, Junior and To ny; grandchildren, Tyra, Brittany and Ricardo; sister-in-law, Josephine Pettus; nieces, nephews, aunts, uncles,other relatives and friends.

The family of Augustine R. Jennings created this Life Tributes page to make it easy to share your memories.

Send flowers to the Jennings family.