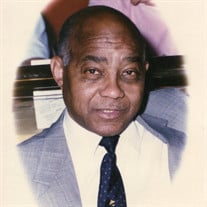 Arthur Hugh Pierson, Sr., 91 was born August 29, 1929 to the late Lillian and Ernest Pierson in Plainfield, New Jersey. He passed at Bon Secours Community Hospice House on March 12, 1921 in Chesterfield, Virginia. He graduated from Plainfield High School, in Plainfield, NJ. He was employed by the United States Postal Service for 30 years of dedicated service. Also, IEEE for 10 years. Arthur was a member of Trinity Baptist Church. He loved sports but basketball was his favorite. He enjoyed traveling and social time with family. Arthur was a loving provider and husband, father, grandfather and brother. He was preceded in death by his siblings Leroy Pierson, Raymond Pierson, Wilbert Pierson, Robert Pierson, Doris Lake, Barbara Martin, Carol Parker, Marie Moore, Jacqueline Henry, Ernest Pierson and a stepson Marvin Harris. Arthur leaves to cherish his memory a loving devoted wife of 63 years, Dorothea Pierson; daughter, Robin Cozart (Arthur); a son, Arthur Pierson Jr. (Abrina); grandchildren, Nikea, Camisha, Destiny, Arthur III, Brandon, Elijah, Deniqua and Waydell; one great-grandchild, CreeMakai; sister, Gloria Williams (George); sister-in-law, Edna Jones; several nieces, nephews; and a host of other relatives and dear friends. The harvest does not speak of an untimely cutting down of the grain; rather it speaks of it being in its season. Therefore, the life lived by our departed love one should not be viewed as untimely, but in it’s season, the season of God’s choosing. To live fully would involve growing physically, intellectually, and most of all spiritually to have a love and compassion for family. Embracing the appreciation for the one that gave life, gave provision, good or bad; realizing it all is granted possible through the blessings of Jesus Christ.

The family of Arthur Hugh Pierson Sr. created this Life Tributes page to make it easy to share your memories.

Send flowers to the Pierson family.