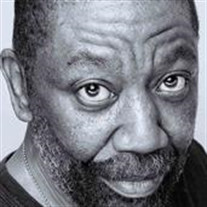 Arnold Coates, Sr., son of Ella Mae and the late James D. Coates, was born October 3, 1958, in Baltimore, MD. He was called to his eternal rest on the morning of December 7, 2021. He was educated in the Baltimore City Public School System, where he graduated from Carver Vocational High School in 1976. There, he was a three-sport letterman, playing baseball, basketball, and football, where he played serve his country in 1978. He served 4 years as a mechanic and a marksman, and was honorably discharged with the rank of Private First Class. After serving his country, Arnold was employed as a correctional officer at the Jessup Correctional Institute. He married Jonell Lambirth in May, 1981 and out of this union he was blessed with a son, Arnold Coates, Jr. On December 29, 2000, he married Michelle Hopkins, and from that union he was blessed with another son, Kevin Anthony Coates. Arnold's children were the joy of his life. Arnold was a DJ. He was also a bass guitar player and sang lead vocals in the band, "Cream Finish", where his stage name was "Zipp". Arnold loved being a mechanic and fixing any type of car. He was employed by several auto shops, including Pit Stop, Congress,, Just Tires, Precision Tune, and finally Alessi & Son until his health would no longer permit him to work. If you called at anytime, Arnold would pack his tools and get you back on the road.! His #1 occupation was being a "jokester". It didn't matter if you were happy or sad, he would make you laugh or mad. Every phone call was ended with "Ciao!" or "Peace out!" Arnold was preceded in death by his loving father, James D. Coates, and brother Michael Anthony Coates. He leaves to cherish his memories: 2 sons, Arnold Coates, Jr. (Bena) and Kevin Anthony Coates, one stepdaughter, Jassmyn Chase, 2 grandsons: DeAndre Coates and DeAngelo Coates, a devoted mother, Ella Mae Coates, 5 brothers, Alexander Coates, James Coates, III (Vanessa), Jerome Coates (Tina), Glenn Coates (Shannon), Stanley Green, 4 sisters: Devora Hart, Jocelyn Rogers, Jacqueline Gregory (Michael), Candice D. Owens (Demetrius), an amazingly large host of nieces, nephews and cousins, 2 special cousins, Patricia Graves and George Graves, and a devoted and loving mate, Regina Garrison.

Arnold Coates, Sr., son of Ella Mae and the late James D. Coates, was born October 3, 1958, in Baltimore, MD. He was called to his eternal rest on the morning of December 7, 2021. He was educated in the Baltimore City Public School System,... View Obituary & Service Information

The family of Arnold Coates created this Life Tributes page to make it easy to share your memories.

Send flowers to the Coates family.