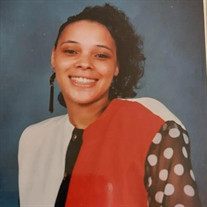 April "Renee" Randolph was born April 23, 1966 in Baltimore, MD to Linwood and Lucille Randolph. She was called home to an eternal & peaceful rest on Friday, January 21, 2022 unexpectedly. April, often referred to as Renee, was a child of God and loved the Lord. She was baptized at an early age, by the Late Rev. Carter, who she always spoke highly of. Throughout her years she attended New Shiloh Baptist Church and she never lost her faith, no matter the weather. Renee received her education in Baltimore City Public School Systems. She graduated from Northern High School, while also attending The Peabody School of the Arts, where she studied modern dance. Throughout her adult years, she worked in the healthcare field as a nursing assistant and held numerous other jobs. Renee was full of life, fun, love and joy. She was known for her hugs, cheek biting, and her baked mac and cheese. Renee was the life of the party and she loved old school jams. She taught us to move to the rhythm of your beat and to never stop dancing even when the music stops. Her favorite thing to say was, "Do you wanna get up or do you wanna get down?" She lived her life unapologetically & on her own terms. Renee had many friends & made new friends wherever she went. She had a smile that would light up any room. She will be sincerely missed by everyone who knew and loved her. She was preceded in death by, Her grandparents, Her favorite Uncle Phil, Her eldest granddaughter Ky'Eesha Williams, Her niece Tina and Nephew Kenneth. Renee leaves to mourn, Her parents Linwood & Lucille Randolph, 2 daughters Ieesha Edwards & Sharda Randolph, 1 son Stephon Stanley, 3 granddaughters K'Mera Niasia Renee Pauling, Milan Cincere Parker & Amelia April Stanley, 2 grandsons, Ky'Mani Thomas Charles Pauling and one on the way. Her sister Teresa Greene, 3 brothers Thomas Greene, Kenneth Randolph & Lee Linwood Randolph Blount, Nieces Toneka, Tiona, India, Stephanie, Tenesha & Ameerah, 1 nephew Davon, Her significant other Andre Stokes and a host of other relatives & friends.

April "Renee" Randolph was born April 23, 1966 in Baltimore, MD to Linwood and Lucille Randolph. She was called home to an eternal & peaceful rest on Friday, January 21, 2022 unexpectedly. April, often referred to as Renee, was a child of... View Obituary & Service Information

The family of April Renee Randolph created this Life Tributes page to make it easy to share your memories.

Send flowers to the Randolph family.