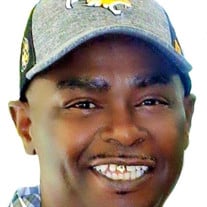 Anthony K .Sorrell, the youngest of the late Maude Jackson and late Otis Sorrell, was born October 12, 1959 in Baltimore, Maryland. Anthony entered rest and received his crown on March 4, 2021. Anthony fondly called “Lump”, accepted Christ at an early age. He received his education from Baltimore City public School System. After high school, Anthony enlisted in the United States Marine Corps and services his country well. Anthony worked for John Hopkins Hospital for many years; other employments were with the Coast Guard, the Nathaniel Aquarium, and security positions. Anthony loved and adored his two beautiful daughters, Lakeisha and Latria. He had a special and unique relationship with them both. He would cook for his girls and spend precious moments with them or they would just hang out together. He was also a proud grandfather and an all-around good guy. His care was given with love and purpose. He was perfectionist in all that he did. He found joy in helping and being with you. He always brought positive vibes when he was in your presence, as he would greet you, “What's happening man”. Anthony came at you with that cute smile of his full of life, shared wisdom, and jokes, for he could be so funny. He would talk to you straight from his heart. If there was a need, Lump was the “Go -To Man”. Anthony loved his Baltimore Ravens, a true fan of sports. He especially loved watching his sports with his brother and nephews. He would show up at his nephew Pee-Wee's house at any time and then the fun began. Anthony loved a good game of spades and always had his cards ready. Anthony would choose his partners, but if Chauntez Jr. was around, he was his cutthroat partner for sure. He also could play a mean game of pool. He won championships at the MCVET Center where he met many friends. Anthony was the family +Grill Master”. Not only was he very good on the grill, but he also enjoyed making family and friends happy with his cooking. He was indeed a family man and good soul. He loved hanging out with his brother, Fred. We called them “The Brothers”. He was truly his sister June's right hand man. It was nothing he wouldn't do to show his love for his big sister. Anthony and his sister Debbie had a relationship greater than just siblings. She was his best friend. Anthony will surely be missed by all who love him. Among those who shared his life and preceded him in death were his father, Otis Sorrell; mother, Maude Jackson; brothers, Clarence Williams, Lionel Madison, Tyrone Holmes, and Jerry Holmes; and brother-in-law, Antar Askia. Anthony leaves to cherish his memory his two loving daughters, Lakeisha Sorrell and Latria Sorrell; step-daughter, Sierra Myles; brother, Frederick Sorrell; two sisters, June Askia and Debra Sorrell; two sisters-in-law, Michelle Holmes and Wanda Ford; bonus sister Leona Tucker; three grandchildren, Shawn, Rilee, and Kyrie of/and his former wife, Cynthia; special friends, King and Terrance; devoted nephew, Antwan (Pee-Wee); and a host of family, nephews, nieces, cousins, friends, and the Eastside Community. Anthony, we wished we had more time together, but we will always value the time we did have. You left us without warning. Gone way too soon, now all we have are memories. There are no goodbyes for us; you will always be in our hearts. We love you and miss you. You will never be forgotten.

The family of Anthony Kurt Sorrell created this Life Tributes page to make it easy to share your memories.

Anthony K .Sorrell, the youngest of the late Maude Jackson and...

Send flowers to the Sorrell family.