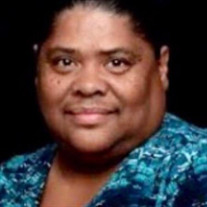 ANNIE RUTH JONES (BUBBLES), beloved daughter, wife, mother grandmother and sister, was born on April 22, 1964 and entered eternal rest on September 27, 2021 with her family surrounding her bedside. Annie was born to the late Mamie and Ibet Brown and the youngest of nine children. Annie was educated at St. Ambrose Catholic School and later graduated from Northwestern High. Annie met Richard, her childhood friend and sweetheart, and they married on March 24, 1986. They were the apple of each other’s eyes. From their union they had two children, one daughter Monique (Missy) and son Richard Jr. (Lil Rick). They had a beautiful marriage for a little over 35 years. Bubbles was affectionately named Bubbles by her eldest sister Janie. Bubbles loved to spend time with her family whether they were having dinner at home, on family vacations or at special events with her grandkids. She loved going to play Bingo with her sisters and going to the casino. Bubbles said she would live her life the fullest and she did. She began going any and everywhere she could. Annie worked in the healthcare profession for numerous years and received several awards of service. Annie retired from Home Instead Health Care Services. Annie leaves to cherish her precious memory: her beloved husband, Richard; her daughter, Monique (Missy); her son, Richard Jr. (Lil Rick); five grandchildren, Javein, Jeremiah, Marleah, Madilyn, and Mila; five sisters, Janie (Richard deceased), Stephanie (Linda), Dorothy (Genero), Henrietta (David), Mamie (Michael); three brothers, Moses (Connie), James (Terry deceased) and Clinton (Terrell Ms. Tee); a host of other relatives and friends

The family of Annie Ruth Jones created this Life Tributes page to make it easy to share your memories.