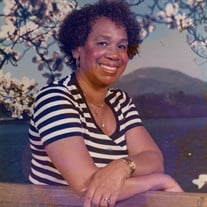 MRS. ANNA LOUISE WALKER, wife of Sylvester Walker, age 88, of Baltimore, Maryland, passed away on Thursday morning, July 1, 2021, at Gilchrist Hospice care. She was born Anna Homer on November 4, 1932 in Wilmington, Delaware, daughter of the late Lula Hinson. Anna was preceded in death by her three sisters Anna Hamilton, Henrietta Turnipseed, Gloria Timmons, her brother Leon Homer, her son William Dickerson and her grandson William Dickerson Jr. Mother Anna Walker joined New Refuge Deliverance Church in the late 1980s under the leadership of the late Archbishop Naomi C. DuRant. She had a hunger and thirst for the word of God. Mother loved and faithfully attended Sunday School. She also studied Spiritual Maturity at the NRDC Academy. She was one who behaved herself in all situations. As a result of her tenacity and wisdom, she was selected to be a mother of the church, thus serving on the Mother’s Board. Mother Walker loved her position and served as the Treasurer until her health failed. She was an avid reader on the nightly prayer line and would often testify, giving God all the glory. After the death of her pastor, the late Archbishop Naomi DuRant, Mother Anna accepted the new pastor, Carolyn Marshall, with open arms. She loved God, the people of God, her church as well as both of her pastors. She also would help wherever she could and whenever she could. She also served diligently until her health failed. Mother Anna was definitely an important part of this ministry. Anna is survived by: her husband, Sylvester Walker; her greatgrandsons, Aric Dickerson and William Dickerson III; a host of nieces, nephews, stepkids, stepgrandkids and friends whom she loved dearly.

The family of Anna Walker created this Life Tributes page to make it easy to share your memories.