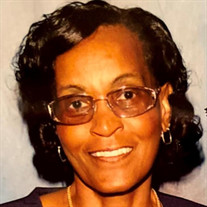 On Thursday, August 12, 2021, ANNA MARIE COATES went home to be with her Savior, Jesus Christ. She departed this life after losing the love of her life, Edward R. Coates, Sr., six months earlier and courageously battling several lengthy illnesses. Anna was born September 17, 1935, to the late William C. Boston and Anna E. Reed in Baltimore, Maryland. She was the fourth of nine children. Anna is survived by: four children, Deborah Coates, Angela Lloyd (Alan), Larry Coates (Angela) and Carol Zollicoffer (Thurman); nine grandchildren, Michael Taylor (Monique), William Coates, Carl Coates, Jr., Shawnté Stevenson, Antoinette Coates, Victoria George, Shaneequah Coates, and Thurman Zollicoffer, III, Donnell Coates; five great-grandchildren, Ariel Craig, Jada Coates, Isaiah Taylor, Karleigh Coates and Christian Williams; two sisters, Mary Livers and Mary Boston; one brother, Larry Boston; and a host of other relatives and friends. After completing her formal education in the Baltimore City Public School System, Anna was a homemaker for her husband and eight children for many years, including when Edward served in the Korean War. When their children were all old enough to look after themselves, Anna entered the workforce. After working various jobs, Anna settled into a 20-year career with the Baltimore City Public School System as a cook. At Westside Elementary School—her final worksite before retiring—she was known by students and staff for baking the best sticky buns and peanut butter cookies among cafeteria personnel. Anna was a loving and generous yet tough woman who always said exactly how she felt. Seldom was there a person she interacted with who did not know precisely where they stood with her. Simply put, she was100% authentic all the time. Even in middle age, Anna was unafraid of new challenges. In her mid-50s, she decided she did not want to spend her retirement years depending on people to take her places, so she got her driver’s license as her retirement day approached. Before her first driving lesson, she had never driven a car. However,less than three months later, she could be found trekking across Baltimore most days in her royal blue Chevy Cavalier, running errands. On Tuesdays, she visited her mother, Anna Boston. On Wednesdays, she treated herself to weekly shopping trips to her favorite malls—Westview and Mondawmin—and stores, Value City, Burlington Coat Factory, Walmart, and Macy’s. Although she loved Christ, she did not always have the patience of a saint. She wasn’t above asking for help; however, if it took anyone too long to complete a task that was important to her, she’d always figure out how to do it herself. Even into her 80s, it was not uncommon for Edward or one of Anna’s children to catch her trying limb a stepladder to change curtains or wash windows when she thought no one was watching. In her spare time, she enjoyed listening to oldies on Magic 95.9, reading James Patterson novels, and watching westerns, Maury, the Price is Right, Deal or No Deal, and the Young and the Restless on TV. She shared a love of basketball with her sons, Carl and Larry. Michael Jordan and Lebron James were her favorite players, and she thought Steph Curry was overrated. She and Edward shared a mutual love of movies. Well into their 80s, they continued to have a Sunday movie matinee date at Security Square Mall every few weeks. Their affinity for cinema started more than 70 years earlier when Anna and Edward met at a movie theater where Edward was an usher. He let Anna and her sisters into the theater for free to get Anna’s attention. It worked. They were inseparable for 70 years following that chance encounter. They didn’t have much money during their early years together, but their abiding love and commitment to each other and to their growing family helped them weather the tough times. When Edward was promoted at Bethlehem Steel, the family moved to Whittier Avenue to a house that has served as home base for the immediate and extended Coates family since then. Their home was where relatives, including those not necessarily joined to them by blood, met to celebrate achievements, mourn losses, and seek advice when life was not working out as planned. Anna and Edward filled the space between the four walls of their home with love, discipline, patience, understanding and faith as they coached their children, grandchildren, great-grandchildren and others to appreciate life’s gifts, learn from their mistakes, and always put family first. Anna enjoyed seeing new places, and she and Edward became frequent travelers when Edward retired. Their favorite place to visit was Las Vegas, but they could never turndown an offer to join their travel club friends on a Caribbean cruise. During trips to faraway places and local casinos, Anna could entertain herself for hours playing the penny slots. At home, Anna and Edward had dinner together each night at 6 p.m. sharp, except when Edward was completing his military duties or worked the night shift at Bethlehem Steel. They sat in the same seats every night for 70 years, Edward at the head of the table and Anna at the other end. And they were happy. Anna was a faithful Catholic and member of St. Peter Claver Catholic Church for more than 70 years. She encouraged her children and grandchildren to seek divine grace through the holy sacraments. That sometimes involved reaching into her purse to give her grandchildren Life Savers candy during Saturday Mass to keep them quiet long enough to receive God’s Holy Word. Anna Coates was preceded in death by her parents, William C. Boston and Anna Elizabeth Reed; husband, Edward R. Coates, Sr.; children, Edward Coates, Jr., William Coates, Carl Coates, Sr. and Linda Wooden; and siblings, Delores Frederick, Geraldine Waites, Myrtle Carter-Summers and William Boston. We all miss Anna’s love, authenticity, generosity, and faith. Her spirit lives on in everyone who she loved and loved her

The family of Anna Marie Coates created this Life Tributes page to make it easy to share your memories.

Send flowers to the Coates family.