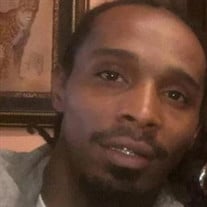 ANGELO PARKER JR., 34, of Baltimore, Maryland passed away January 20, 2022 when he drifted off into eternity to be with the Lord with his immediate family by his side. He was born to Tammy Barksdale and Angelo Parker Sr. of Baltimore, MD on August 28, 1987. Angelo was educated in the Baltimore County Public School System. Angelo gave his life to the Lord at an early age and could be seen preaching the gospel in the middle of the street or on a milk crate to his favorite audience, Mr. Nelson. His untimely death leaves a huge hole in the hearts of his family and close friends who knew him best. There was never a dull moment when Angelo was in the room. He truly brought the life to the party with his dancing skills and infectious laughter. We were always entertained by his hilarious sense of humor and warmed by his huge smile. During his elementary and middle school years, Angelo was a standout recreational football player, becoming a household name in the Arbutus Times. He was a avid gamer and could be found lost in the world of Madden and Call of Duty. Angelo was a die-hard Ravens fan. Whenever they were scheduled to play, he could always be found in front of the flat screen, cheering them on. If there was one thing Angelo was, that was a great debater who had no problem spilling his knowledge, be it right or wrong, whether you wanted to hear it or not. Although Angelo had no children of his own, he was very fond of his nieces, Faith, Hope and Heaven, “the grand-dolls.” Angelo is survived by: his parents, Angelo Parker, Sr. and Tammy Barksdale; bonus parents, Perry Brown and Sabrina Brown; his grandmothers, Frances Parker and Annie J. Smith; along with his brothers, Perry (Dereka), Jeffery, Marceau, Rashad, (Monique), Damien, Kyvon, DiAngelo and Darren; his sisters, Shanea and Per'rys; and a host of aunts, uncles and cousins. Angelo is now at peace, joining his loved ones, Roland and Doris Parker, Inez and Howard Barksdale; and two special aunts, Sharon Chambers and Diane Owens, who preceded him in death. That is one fun party re-united!

ANGELO PARKER JR., 34, of Baltimore, Maryland passed away January 20, 2022 when he drifted off into eternity to be with the Lord with his immediate family by his side. He was born to Tammy Barksdale and Angelo Parker Sr. of Baltimore, MD on... View Obituary & Service Information

The family of Angelo Parker Jr created this Life Tributes page to make it easy to share your memories.

Send flowers to the Parker family.