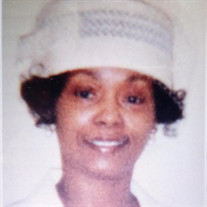 Mother Angelia E. Chin heard the voice of Jesus saying, “Come unto Me, all ye that labour and are heavy laden and I will give you rest.” (St. Matthew 11:28) MOTHER ANGELIA was born October 12, 1960 to A.P.E. Andrew and the late Sr. Mother Juanita Chin. She was the youngest of five children. She was educated in the Port Norris and Millville School Systems. Mother Angelia moved to Maryland where she furthered her education to become a registered nurse and was employed by Amedisys Home Health Care. Her spiritual life was shaped by her parents. (Proverbs 22:6) Train up a child in the way he should go and when he is old he will not depart from it. She became a Junior Minister of The Supreme Council Of The House Of Jacob, Inc. at the young age of 18. Mother Angelia was such a fiery speaker and held many positions in the church. She would often take missionary trips to visit the sick. One of her favorite songs was “Jesus Is Good To Me.” As she was raised to trust in the Lord, and she raised her daughter, Sister Aniya Charity in the same manner. Mother Angelia loved to shop and was great at finding bargains. She had such a giving heart. If she had it and she thought you liked it, it was yours. Mother Angelia was preceded by her mother, Sr. Mother Juanita Chin. She leaves to cherish her precious memory: her daughter, Sister Aniya Chin; her pop, Adv. Pres. Eld. Andrew Chin of Columbus, Ohio; her siblings, Melvina Chin of Jersey City, NJ, Andrew Chin (Joyce) of Milleville, NJ, Elds. Christine Chin of Columbus, Ohio and David Chin (Sandora) of Vineland, NJ; five nieces, four nephews, several great-nieces and -nephews, cousins, friends; special cousins, Ann Stewart and Elds. Darlene Felder; special friends, Mtr. Cosetta Davis and Stephanie Kelly. Ps. 23:1 - The Lord is my shepherd, I shall not want. With Love, The Family

The family of Angelia Chin created this Life Tributes page to make it easy to share your memories.

Send flowers to the Chin family.