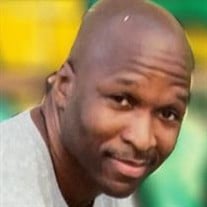 Journey of Life Andre R. Holdclaw, son of the late Chester Holdclaw Jr., and Susan Bartee-Holdclaw, was born January 7, 1969 at Sinai Hospital of Baltimore. He gained his wings suddenly on May 2, 2022. Andre spent most of his life in Baltimore, MD. There he was raised by his grandparents known as “Mama and Daddy”. He also lived in New Rochelle, NY with his mother and younger sisters, Toya and MiMi. Andre received his education in Baltimore City Public School System while was also enrolled in Job Corp of Woodstock, Md. During his time with Job Corp he helped fight forest fires in California. Andre received his Maryland High School Diploma on February 27, 1998 and was very proud of his accomplishments. Andre worked as a Craftsman for “MCE” Maryland Correctional Enterprise Uniform Shop, until his departure. Andre, also known as “Dre” was loyal, giving, and kind hearted. He was funny, always smiling, and walked with his head held high. He would encourage others, especially when they were down. As a teenager Andre loved his bikes, you’d find him popping wheelies up and down the street. He also loved playing the board game scrabble. Not many people knew it, but he could also cook. He would make meals and feed anyone that wanted to eat. Andre was a baptized member and faithful servant of the Seventh Day Adventist Church. There he faithfully served as Head of Security and held many other titles. Andre dreamed of one day becoming a Tractor Trailer Driver and Diesel Mechanic like his Grandpa Bartee. That’s all he talked about. he’d purchase books and devote many days and hours to studying the trade. He was so determined that he had a training program call his sister Adrianne to obtain more information about the school. Andre was intelligent and an overachiever. He earned many certificates for his accomplishments, just to name a few; “Bible Correspondence Course”, “Celebrate Recovery”, and “Workshop for Training and Non-Violence”. He never stopped excelling or desiring to do more with his life, even in his situation. Andre continues to live on in others, as he is now a member of the Living Legacy Donor Foundation of Maryland. Andre was loved and respected and will be missed by many. Andre was preceded in death by his mother, Susan Bartee-Holdclaw; father, Chester Holdclaw Jr.; sister, Mishonda Holdclaw; paternal grandparents, Chester C. and Elizabeth M. Holdclaw; maternal grandparents, Ralph and Mollie Bartee; four uncles, James Holdclaw, Roland Holdclaw, Thomas Minor, and Ralph Bartee Jr.; one aunt, Annie Allen; and twin nieces, Latrice and My’Angel Holdclaw. Andre leaves to cherish his memory: three sisters, twins Adrianne Holdclaw - Mills & Andrea Holdclaw, and Toya Holdclaw; Daughter, Markita Pryor; twin grandsons, Justin and Tristan; four uncles, Ernest Holdclaw, Robert Minor, Douglas Bartee Sr., and Ronald Bartee; four aunts, Marion Rivers, Jeanette Holtzclaw, Joan Cook, and Carol Bartee; two nephews, Morico Holdlcaw, David Holdclaw-Fleet; six nieces, Shaunice Powell, D’Andra Holdclaw, Monica Johnson, Danielle Holdclaw, Dazia Holdclaw, and Skylar Winfield; one great-nephew, Amari Holdclaw; extended family, the Smiths, Brian, Reggie, Turk and a host of family and friends.

Journey of Life Andre R. Holdclaw, son of the late Chester Holdclaw Jr., and Susan Bartee-Holdclaw, was born January 7, 1969 at Sinai Hospital of Baltimore. He gained his wings suddenly on May 2, 2022. Andre spent most of his life in Baltimore,... View Obituary & Service Information

The family of Andre Ronell Holdclaw created this Life Tributes page to make it easy to share your memories.

Send flowers to the Holdclaw family.