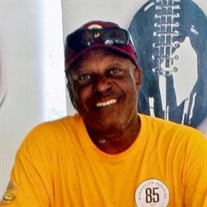 Life and Legacy God saw the road was getting rough and the hills were hard to climb, He gently closed Andre’s weary eyes and whispered, “Peace be Thine.” Andre Keith Carter transitioned to his eternal home on March 10, 2022, surrounded by family, at the age of 57 years young. Andre was born January 7, 1965 in Richmond VA to Wilbert Robert Carter and Pauline DeBerry Carter. He leaves to cherish his memories daughter, Brittany Kenny; grandson, Greyson Canady; sister, Tonya Davis; brother, Michael Carter; sister-in-law, Robinette Carter; niece, Makayla Carter; and nephew, Michael Carter Jr. Andre was educated in Varina High School, Richmond VA. He furthered his education at Richmond Barber School in Richmond, VA. Shortly after completing barber school, he was employed by Harvey’s, Total Transgression, and Onyx Hair Salon. Where do we begin to tell you about Andre Keith Carter—better known to us as Keith? He was the light of our family. What we’ll miss most: Keith was one-of-a-kind. He had a funny sense of humor and was a great story teller. Regardless of the occasion, his personality was infectious. His booming voice and perfect comedic timing would light up a room. Being the oldest of his siblings, he was a protector. It was his nature to help family and friends. As the saying goes, he would give you the shirt off his back. He was a defender of others throughout his life. Keith’s love for sports was apparent. While attending school in Varina he played baseball but was passionate about football. He received numerous awards and honors. There was even a news article written in the local paper. Keith was a member of Hobson Lodge #23, Richmond VA. Always a sharp dresser. It was important not only for him to represent, but he wanted his friends to as well. Giving his friends “tight” haircuts started his career as a barber in his friend Cedric’s garage. As a matter of fact, Cedric was Keith’s first guinea pig. Keith and his friends threw legendary house parties. That was during the time when social media didn’t exist and invites were spread by word of mouth. There was fun to be had by all. At the end you lived to talk about it for days after. No matter what their stats, Keith was a diehard Redskin super fan. He had so much Redskin gear. Occasionally he would dress from head to toe in Redskin. One of his highlights as a dedicated fan, was serving as an ambassador at a Redskin’s training camp. Keith loved children and they loved him. He was a proud father to his daughter Brittany Kenny, and grandson Greyson Canady. When he talked about them you could hear the joy in his voice. They will truly miss all of his love and affection.

Life and Legacy God saw the road was getting rough and the hills were hard to climb, He gently closed Andre&#8217;s weary eyes and whispered, &#8220;Peace be Thine.&#8221; Andre Keith Carter transitioned to his eternal home on March 10, 2022,... View Obituary & Service Information

The family of Andre Keith Carter created this Life Tributes page to make it easy to share your memories.

God saw the road was getting rough and the hills...