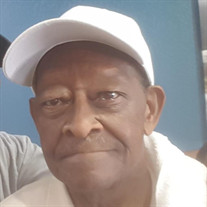 ALVESTA “PIG” EDMONDS was born to the late Ernest and Louise Edmonds on March 14, 1933 in Halifax County, North Carolina. He was the second of seven children. He departed this life on Monday, September 13, 2021 after a brief illness. He received his education in the North Carolina school system. He accepted Christ at an early age as his Lord and Savior. He was affectionately known to many as “Mr. Pig”. He left North Carolina at a young age and moved to Washington D.C. where he worked various jobs. He then moved to Baltimore MD where the job opportunities were better. He was employed by Esskay Meat Company for over 30 years from which he retired in 1991. In 1955, he married Gertrude Jacobs and from this union five children were born after 6 years of marriage. Nothing gave him more pleasure than taking care of his wife and children. He had his own personal nicknames for his children. Pig enjoyed spending time with his family and friends. He really enjoyed family time. He was an avid baseball fan. He was a home body and had a quiet spirit. He loved watching television especially baseball games and old western movies. The Baltimore Orioles and Gunsmoke was his favorite TV shows. He loved playing cards and his preferred genre of music was the “blues”. He had a guitar himself and he really thought he was “BB King”, his favorite artist. He loved wearing hats and caps; he had a variety of them but he loved the brown, tan and black ones the best. Alvesta was preceded in death by his sister, Jessie Hill and brothers, David and Ernest Edmonds. He leaves to cherish his memory: his devoted wife of 66 years Gertrude; three daughters, Linda, Sharon, and Andrea; two sons, Darryl and Mark; five grandchildren, Darryl, Shantel, Shameka, Jerrod, Kiera and eight great-grandchildren; two brothers, James Cleveland (Irene) Edmonds of Alexandria, VA. and Edwin (Vernell) Edmonds of Santee, SC; one sister, Jean Everett of Washington D.C.; two sisters-in-law and a host of nephews, nieces, other relatives and friends.

ALVESTA &#8220;PIG&#8221; EDMONDS was born to the late Ernest and Louise Edmonds on March 14, 1933 in Halifax County, North Carolina. He was the second of seven children. He departed this life on Monday, September 13, 2021 after a brief illness. He... View Obituary & Service Information

The family of Alvesta Edmonds created this Life Tributes page to make it easy to share your memories.

ALVESTA “PIG” EDMONDS was born to the late Ernest and Louise
Edmonds...

Send flowers to the Edmonds family.