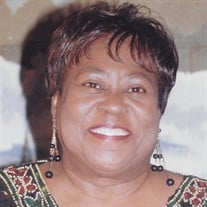 Alverta Franklin Johnson (aka Bird), daughter of Florence Sharps and Whitfield Franklin, was born on March 7, 1928 in Harwood, Maryland and was called home by God on Tuesday, May 4, 2021. She was preceded in death by her Husband John Ernest Johnson Jr., Son Rev. Michael Ernest Johnson, Daughter Yvonne Denise Johnson and special daughter Henrietta (Sis) Herbert. She was educated in Anne Arundel County Public Schools and attended Princess Anne College now known and the University of Maryland Eastern Shore. While at Princess Anne she met Ernest, the love of her life. They were married in 1950 and enjoyed 56 years of marriage. From this union two children were born Michael and Denise (who both proceeded her in death). Alverta was employed with the Social Security Administration and held multiple positions during her years of service. She would fondly mention how proud she was to have a desk job at a time when very few blacks could have a desk job. After 22 years of service, she retired from the Social Security Administration in 1978. She then decided to take on a new challenge as a Substitute teacher in Baltimore City Public Schools and was recognized as Substitute Teacher of the Year in 1988. After leaving the school system she and her husband opened the doors of their home to children in need of love and care becoming foster parents. Their love was shared by over 65 children over the years. She loved the Lord. Her early Christian education began at Chews Memorial Church in Harwood. After being married and swept away to Baltimore she found a church home at the Cherry Hill Presbyterian Church. There she served the Lord as a member of the choir and on the Deacon board. She later moved her membership to Hemingway Temple A.M.E. Church. As a member of Hemingway Temple, she became a member of the Senior Choir, the Hemingway Herald, the Steward Board and Cora B. Philmore Missionary Society. She was the founder of the Reverend Michael E. Johnson scholarship Fund which helped college bound students from the communities of Cherry Hill, Lakeland, Westport, Brooklyn and Mt. Winans. Alverta was loved by many and loved her family as well as hosting family gatherings. Alverta or Aunt Bird enjoyed traveling. Some of her favorite destinations were Rio de Janeiro, Hawaii’s black Sand beaches, Las Vegas, Mexico, Canada, Bermuda, Grand Cayman and wherever Carnival Cruise ships would take her. She took pride in gardening and her flowers both inside and outside of her home helping her block become Baltimore Afro American Newspaper’s “Block of the week”, on two occasions. She loved Soap Operas and Victor Newman, Malcolm Winters (Shemar Moore) and Bob Barker but not as much as she loved her Ernest. Alverta enjoyed listening to Gospel music, word searches, newspapers and sitting on her porch getting some sun. She was a member of the Order of Eastern Star, Communities Working together, Cheraton, Hillview and Terra Firma (C.H.A.T.) and the Share Food program. She left a lasting impression on all who met her. Cherishing her memories, she leaves to mourn: one daughter June Lomax (Frank); 3 granddaughters Lisa, Tammy and Monica; two Grandsons Claude Johnson Jr. (Veronica Johnson) and Mark Johnson; twelve great grandchildren Onyae Johnson, DeShaun Johnson, Bryce Johnson, Claude Johnson III, Quinn Johnson, Gregory Lomax, Adrian Lomax, Brian Lomax, Jordan Thomas, Brittany Thomas, Sydney Bowman, Megan Lomax; special Son in Law (Kirson) Dana Herbert (Netesha), Jeffery Herbert (Yadira), two God Daughters Cheryl Davis and Erica Baptiste and a host of nieces, nephews, relatives, and friends. Special Thanks to her girls Jonetta Arnold, Debbie Green and Shannon High for your help and support over the years.

Alverta Franklin Johnson (aka Bird), daughter of Florence Sharps and Whitfield Franklin, was born on March 7, 1928 in Harwood, Maryland and was called home by God on Tuesday, May 4, 2021. She was preceded in death by her Husband John Ernest... View Obituary & Service Information

The family of Alverta Johnson created this Life Tributes page to make it easy to share your memories.