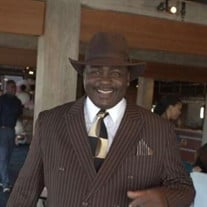 In my Father’s House are many mansions; if it were not so, I would have told you. I go to prepare a place for you. John 14:2 Alphonzo Taylor, Sr. a devoted Husband, Father, Grandfather, Brother, and Friend made his transition from earth to heaven on March 19, 2022. Alphonzo was born February 7, 1952, to Isadora Taylor and Elton Taylor, Sr. Alphonzo was born and raised in Richmond, Virginia and was preceded by death by his mother Liberty Isadora Taylor, his father Elton Sr., and two brothers Elton Jr., and Alonzo Sr. Alphonzo was a graduate of John F. Kennedy High School where he played basketball, football and soccer 1968-1972. Alphonzo then went on to play collegiate football at Virginia Union University under Head Coach Willard Bailey. Alphonzo was a member of the Saint Paul’s Baptist Church for over 20 years, serving in the male choir under the direction of Glenn Davis. He was passionate about his love for God and made it to church every Sunday to hear the word from Dr. Lance Watson, Sr. Alphonzo often talked about his relationship with God and that God had been good to him for “All These Years”. He was an impact in the community and worked for the Virginia Department of Corrections for over 25 years of dedicated service. He retired in October of 2015. Alphonzo enjoyed family vacations, watching sports, spending time with his sons and grandchildren and his devoted wife Linda. Alphonzo leaves behind a devoted wife Linda Taylor of 43 years of marriage. He is the father of Alphonzo Taylor, Jr., Dawayne Everette Taylor, and Isaiah Isadore Taylor; father-in-law to Alicia Taylor and Terra Taylor. Alphonzo has six grandchildren (oldest to youngest) Alyssa Taylor, Kendall Taylor, Alphonzo Taylor III, Kennedy Taylor, Ashtyn Taylor, and Kenleigh Taylor; two sisters, Rev. Beatrice Lowry of Richmond, Virginia and Arthea China of Phoenix, Arizona; a host of family and friends. His authentic personality and generous heart and spirit will greatly be missed by all. We leave each one of you with these words that Alphonzo Taylor Sr. lived by don’t let nobody, I mean nobody steal your joy.

In my Father&#8217;s House are many mansions; if it were not so, I would have told you. I go to prepare a place for you. John 14:2 Alphonzo Taylor, Sr. a devoted Husband, Father, Grandfather, Brother, and Friend made his transition from earth... View Obituary & Service Information

The family of Alphonzo Taylor, Sr. created this Life Tributes page to make it easy to share your memories.

In my Father’s House are many mansions; if it were not so,
I...

Send flowers to the Taylor, family.