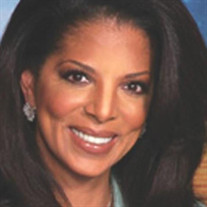 Allison Griffin Payne departed from this life on Wednesday, September 1, 2021, in Detroit at the age of 57. Allison was born in Richmond, Virginia on February 12, 1964, to Kathryn Griffin Payne and Dana Edward Payne, both who preceded her in death. At an early age, she and her parents relocated to Detroit. Allison attended Saint Rita’s Catholic grade school and later graduated from Detroit’s prestigious Renaissance High School for gifted and talented students. Upon graduating from high school, she matriculated at the University of Detroit Mercy where she graduated Cum Laude with a Bachelor of Arts Degree in Communications and Business Administration. Allison went on to further her education by earning her Master of Arts Degree in Media and Communications from Bowling Green State University in Ohio. Allison was a member of All Saints Episcopal Church in Detroit. Allison was blessed with a highly successful professional career in television broadcast journalism in which she attained national recognition for professionalism and excellence in media and news coverage. She began her career in Toledo, Ohio at WNWO Television as an intern, then as a general assignment reporter and then as an anchor. Following her success in Toledo, she moved to Saginaw, Michigan to become an anchor for the 6 and 11 p.m. newscasts at WNEM Television. It was Allison’s arrival at Chicago’s WGN Television in 1990 that led to her becoming a fixture through cable television in homes throughout the nation in the 1990’s until the middle 2000’s. She put a real face on stories for local, national, and international audiences for almost 2 decades anchoring prime time newscasts and producing specials. During her career, Allison established a national standard in broadcast journalism being one of only a few African American women to reach such stature at that time. Her career in broadcast journalism was highlighted by numerous achievements such as her coverage tracing former President Barack Obama’s roots in Kenya and her coverage of Reverend Jesse Jackson’s attempts to broker a peace agreement between Israel and Lebanon in the Middle East. Allison’s hard work and professionalism during her tenure at WGN Television earned her numerous recognitions including nine Emmy Awards for excellence in television journalism. Allison possessed a giving spirit and she sought to share her wealth of knowledge and experience with aspiring journalists and others through her ‘Ethics in Journalism Foundation’ and the ‘Payne Productions Company’. Through these endeavors she taught basics of the television journalism trade undergirded by principles of fairness and objectivity. In Allison’s own words “helping new interns who join the newsroom makes me smile”. She was a longtime member of the National Association of Black Journalists and a proud member of Delta Sigma Theta Sorority, Incorporated where she enjoyed the love of her many sorority sisters. Anyone who knew Allison knew she never met a stranger. Her beautiful smile lit up a room. Her warmth and kindness extended to everyone she met, and her big heart enabled her to share herself and resources generously and selflessly. Allison was preceded in death by her beloved parents, Kathryn Griffin Payne and Dana Edward Payne. She leaves to cherish her memory several loved ones including aunts Arnida Allen (Richard) of Virginia Beach, Virginia; Lottie Anderson of Dahlgren, Virginia and Ann Griffin of Petersburg, Virginia; uncle Harold Anderson of King George, Virginia; godfather Wendell Foster of Richmond, Virginia; goddaughter Carmen Pierce of Durham, North Carolina; cousins Jennifer Allen of Virginia Beach, Virginia; Kenneth Allen (Lynn) of Chesapeake, Virginia; Lori Anderson of Lorton, Virginia; Valerie Allen of Virginia Beach, Virginia; Wendy Allen of Charlotte, North Carolina; Stephanie O. Gordon of Virginia Beach, Virginia; Anthony Griffin of Charlotte, North Carolina; Harold Griffin of Charlotte, North Carolina; Tanya Griffin of Charlotte, North Carolina; Cynthia R. Hannah of Virginia Beach, Virginia; Deidra Griffin Harry of Chesterfield, Virginia; Arlene Knight of Richmond, Virginia; Beverly Mills (Stephen) of New York, New York; Diane Pierce (Raymond) Durham, North Carolina; Angela Seaborne of Petersburg, Virginia; Ralph K. Williams of New York, New York; Russell M. Williams, Jr. (Janice) of Annapolis, Maryland and Willi Ann Williams of Henrico, Virginia. She also left a host of other relatives, friends, and colleagues.

Allison Griffin Payne departed from this life on Wednesday, September 1, 2021, in Detroit at the age of 57. Allison was born in Richmond, Virginia on February 12, 1964, to Kathryn Griffin Payne and Dana Edward Payne, both who preceded her in... View Obituary & Service Information

The family of Allison Griffin Payne created this Life Tributes page to make it easy to share your memories.

Allison Griffin Payne departed from this life on Wednesday, September...

Send flowers to the Payne family.