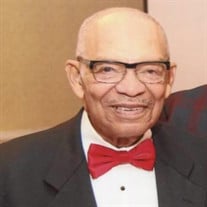 On Wednesday, November 24, 2021, the Heavenly Angels called home to rest Allen McKinley Meacham, Sr., a beloved father, grandfather, great-grandfather, brother, uncle, cousin, mentor and friend. With gratitude in our hearts for the time the Lord allowed us to share his life, we set aside this day to celebrate. He was the third of four children born to the union of the late George, Sr. and Sadie Meacham on February 17, 1926 in Aiken, South Carolina. Sadie passed when Allen was five years old. George. Sr. later married Ms.Thelma and completed the family with the birth of his sisters, Selitha and Cassandra. Allen received his formal education in the public schools of Aiken. After completing his military service in the United States Navy in 1945, he then attended Hampton Institute (University) where he received his degree and met his future wife, Erma Ann. They married and settled in Baltimore, Maryland where they made a life together and raised their son, Allen, Jr.. His love for his alma mater was evident in his annual road trips back to Hampton’s homecoming weekend. Allen was an emeritus alumnus of the “home by the sea.” Allen’s professional career in education was with the Baltimore City Public School System. During his career, Allen was a teacher at Paul Laurence Dunbar Senior HIgh School where he taught vocational studies from 1954-1976. Always believing that his work was to “try to make good citizens and not just good students and athletes”, Allen heeded the calling to become an administrator serving as assistant principal at Calverton Junior High School from 1976 up to retirement in 1983. His leadership both in and out of the classroom led to his being held in high regard within the east Baltimore community. Outside of his love and commitment to family, one of Allen’s greatest passions that brought him tremendous pride was his membership in The James Mosher Association, an athletic organization in Baltimore City which provides community support and athletic opportunities in the sport of baseball for over 60 years to thousands of children. He was a founding member of the organization and has held various roles within the organization during that time including coach, manager, president and commissioner. Allen’s faith was a key component of his life. He was a member of Sharon Baptist Church for over 60 years and served his church as a member of the usher board and as a church trustee. Always known as a snazzy dresser, Allen was once referred to as “pretty shoes” and this nickname stayed with him throughout his life. His attention to detail in all that he touched was his trademark. As Allen joins the gathering of family who passed before him it includes his wife Erma, his father, George, Sr., his mothers Sadie and Thelma, his brother, George, Jr., his sisters Merits, Marcelle, Selitha, and Cassandra, sisters in law Zemma Meacham and Mary Johnson, and brothers in law John Eversley, Michael Menefee, Sr. and Harold Ray Johnson. He leaves fond and precious memories to be cherished by his son Allen, Jr. (wife Deborah), two grandchildren Persephone and Jason, two great-grandchildren Lonnie Jackson IV and Jasmine Meacham, nieces and nephew Sharon, Ora (James), Lily (Michael), Sonya, Mary, and Michael Jr., devoted friend Ernestine “Tina” Jennings, and a host of cousins, other relatives, friends, and extended family including the Freeman, Willis, Joyner, Minson, and Jennings families who affectionately called him Grand Pop, Big Al, Mr. Meacham, Dad or Mr. Al. Allen is leaving a void which will never be filled. His imprint will never be erased. His love will always surround us. We can all find our solace in knowing that our paths will meet again. In the future we know that our minds will be filled with instant recollections of his presence, especially when we have a good meal and intense conversation. So today with love we celebrate the completion of his task. Rest in Peace Dad!

The family of Allen McKinley Meacham Sr created this Life Tributes page to make it easy to share your memories.

Send flowers to the Meacham family.