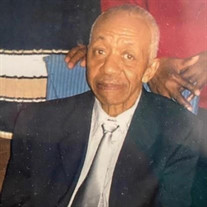 ALLEN ADOLPHUS GOLDSBOROUGH was born on March 7, 1933, the ffth child of late James Albert Goldsborough and the late Dollie Dorothy Goldsborough (nee St. Rose). He had multiple siblings who preceded him in death: Leon (Dexter), James (Jimmy), William (Saint), Ann, Betty Jean, Robert (Bo), and Ellsworth (Humpy). Allen transitioned from this life on February 12, 2022. Allen, “Goldie” as he was sometimes called, was born and raised in East Baltimore. Allen attended Baltimore City Public Schools. Although he only offcially completed the 7th grade, he was highly intelligent and learned a great deal independently. During his teenage years, he was an active member of the Boy Scouts. He worked as a Western Union delivery person and he rode his bike to deliver telegrams. Allen, Doris and Wil would fx up the house (painting and wall papering) for the holidays. Allen was good at fxing and building things. Being a curious guy, he would disassemble clocks, radios and stereos just to see what made them work. He and his friend Burnie once bought a car that they took apart. The whole neighborhood was talking about them. Allen enlisted in the United States Army and was honorably discharged in 1955. Upon reentering civilian life, he went to work for the Oles Envelope Company. From his union with the late Shirley Goldsborough, he had three children: Jeffrey, Mark, and Janice (Pixie), and he was close to his stepson, Gerald Eldridge. Allen left Baltimore and lived in Detroit, Michigan for a short while. Upon returning to Baltimore, he worked at Bethlehem Steel for a short period of time. Allen faced a diffcult period in 1972 having a near fatal accident which left him partially paralyzed. Allen was rehabilitated after his accident, and he continued to use his talents. He was good with carpentry; he built things and remodeled the basement in the Chilton Street house. He was very good with crossword puzzles. Every Sunday, he would get the Sunday paper to work on the puzzles (something he enjoyed with his brother-in-law, Price). He spent most of his time with his mother and brother, Humpy, and the three of them watched the soap operas and other tv shows together. Allen enjoyed friends and family stopping by to spend time at their home on Chilton Street where the front door was never locked. After the death of his mother, his health began to decline, and he was no longer able to function in the house. He was moved to a nursing home. Although he resided in the nursing home, he continued to attend family gatherings. When he began to feel that it was too diffcult to come out, the family took the parties to him. Allen left as only Allen could and broke our hearts, but we will always love and miss him. For we know that this is his victory. He leaves to cherish his memory: three sons, Gerald, Jeffrey and Mark; one daughter, Janice; four sisters, Doris, Wilhelmina, Theresa, and Mary; one brother, Andrew; numerous nieces, nephews, cousins, neighborhood friends, and persons from Future Care Nursing Home who got to know him.

The family of Allen A Goldsborough created this Life Tributes page to make it easy to share your memories.

Send flowers to the Goldsborough family.