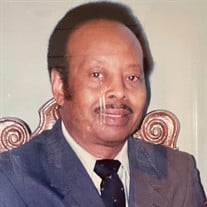 Albert McDonald Moore, a loving, caring, talented man was God's gift to hi parents, family, the world, and his devoted wife, Peulah Marie Moore. Albert was born on May 7, 1929, in Old Fort, NC to Henry A. Moore and Ella Johnson Moore as their... View Obituary & Service Information

The family of Albert M. Moore created this Life Tributes page to make it easy to share your memories.

Send flowers to the Moore family.