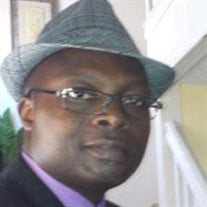 This day is a profoundly sad one, for we are all gathered here in memory of our beloved friend, father, uncle and son Afolabi Monsuru Lawal. However, even in this time of grief, we cannot help but reflect on the many wonderful experiences we were all fortunate enough to have with Afolabi. Many of his friends and family members have shared their fondest memories with me. With their permission, I’ll share those with you today. Ask anyone who knew him, Afolabi was an incredibly kind and gracious person. He was a loving and dedicated son, the best brother to his siblings, an amazing uncle to his nieces and nephews and a great friend. Whether he was helping his nieces with their collegiate expenses or helping at-risk youth in Baltimore, he was indeed the epitome of kindness and patient to a fault. He was also an extremely selfless individual. He rarely asked for anything from anyone, and as someone who loved to give, his generosity knew no bounds. There was a time he slept in a petrol station in Ikotun because he didn't have enough bus fare to take him back to his home in Ejigbo. He did not ask anyone for a dime and negotiation with the bus conductor was out of the question. Or, was it when he had to walk barefoot from the Costain area to Ojuelegba when he was "obtained". His hardships were his and his alone as Afolabi was no stranger to adversity. Yet his kindness and goodwill never wavered, a true testament to the peaceful conviction of his character. Professionally, Afolabi was a brilliant scholar and gifted journalist. He graduated at the top of his class from the University of Lagos and upon completion, got a job with Punch Newspapers after the National Youth Service Corps program. He would later rise to the position of editor before moving over to ThisDay Newspapers. His colleagues at both establishments would testify to his brilliance and rigorous work ethic. He was a true believer in justice and the power of the free press. Folabi was also Alumni Member of Methodist High School, Arigbajo, Ogun State, and with his participation as a member, the association has been very supportive to him and the family, during this period. Afolabi was a hardworking, strong and loving person who truly believed that if you worked hard and treated people right, with a little luck from the Almighty, you could have a good life. He was a man of earnest fortitude and love right up until his last days with us. In fact, a few weeks before he passed, he met two of the newest additions to his family, his 1-year old grand-nephews via WhatsApp. The happiness he expressed in seeing the legacy of his family live on was a beautiful testament to the joyous ties that bind us all, no matter the distance. Sleep on Afolabi, our brother for we are all very blessed indeed for having known you. For having loved you and been loved by you. To have called you our own (Father, son, brother, uncle, friend) with so much pride and gratitude to God. Survived with children, Desola Lawal, Olanrewaju Lawal and mother, cousins, nephew and nieces.

This day is a profoundly sad one, for we are all gathered here in memory of our beloved friend, father, uncle and son Afolabi Monsuru Lawal. However, even in this time of grief, we cannot help but reflect on the many wonderful experiences we... View Obituary & Service Information

The family of Afolabi Lawal created this Life Tributes page to make it easy to share your memories.

This day is a profoundly sad one, for we are all gathered here...

Send flowers to the Lawal family.