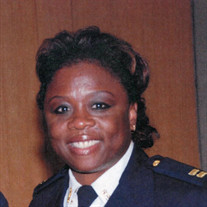 A beautiful baby girl was born on March 25, 1963 at 3:00pm weighing 5lbs and 4ozs. Her parents would name her Adrianne Elaine Ballard. On April 27, 2021, God looked around his garden and found an empty place; he put his arms around her and lifted her to rest. Adrianne also known as “Adele” as a child she would cling to her mother. As she grew older and into adulthood, the clinging was, replace by her take-charge attitude. Adrianne was a loving mother to Chris and Trey they were her world, and then another young man came along and stole her heart grandson Dallas. She truly was a loving and doting Na Na. Adrianne took great pride in taking care of and spending time with her family and friends. She will truly be missed. Adrianne accepted Christ as her Lord and Savior at an early age and became a member of Good Shepard Baptist Church in Richmond Virginia under the leadership of Rev. Paul Nichols. Her spiritual growth would continue to be nurture under the leadership of Rev. Sylvester Smith. Adrianne is a graduate of Henrico High School class of 1981. During her educational career, she attended J. Sargeant Reynold Community College with a degree in Computer Information Technology and she graduated from St. Paul College as Cum laude with a degree in Organizational Management. Adrianne first job was working at McDonald and her career continue to move forward. She joined the Richmond City Police Department in 1985 making it her career for 25 years until she retired. Adrianne’s drive and determination make it possible for her to move through the ranks and retire as the first black female captain. (Captain Adrianne McLemore). Following in her family’s military background she joined the Air force Reserves in the early 80’s.With the same dedication and determination, she decided to become a substitute teacher at Harvey Elementary School. She would come home every day talking about her “babies”. She leaves cherished memories to her loving and devoted sons, Christopher Brandon Ballard, Glenn Jack”Trey” McVey III (Melissa Velasquez) ; daughter/niece Deitra Ballard; grandson Dallas McVey; two Goddaughters Ashely Bragg and Emari Carter; devoted parents Webster and Delores Ballard; Godmother Mary Bivens of Richmond Va.; two brothers, Gerry Ballard (Darlene), Karlton Ballard (Carolyn); three sisters, Terri Epps, Antoinette Ballard , Formeka Hines (Autie); three loving uncles and four aunts, Uncle Arthur Somerville (Aunt Ruby) of Boston Ma. , Uncle Calvin Somerville (Aunt Vivian) of Pensacola Florida, Uncle Donald Somerville (Aunt Sharon) McDonough Ga., Aunt Attrue Johnson of Bowie Md.; devoted friend Kimi Whitehead; and a host of nieces, nephews, cousins, friends and her pet dog,Ellie Marie.

A beautiful baby girl was born on March 25, 1963 at 3:00pm weighing 5lbs and 4ozs. Her parents would name her Adrianne Elaine Ballard. On April 27, 2021, God looked around his garden and found an empty place; he put his arms around her and lifted... View Obituary & Service Information

The family of Captain Adrianne Elaine McLemore created this Life Tributes page to make it easy to share your memories.

Send flowers to the McLemore family.