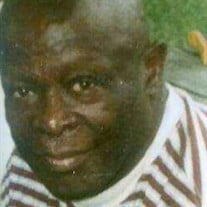 ABRAHAM BENNETT was born on September 28, 1938 to the late Edward and Ella Mae Bennett in Baltimore, Maryland. Abraham made his heavenly transition from earth to his final resting place on July 03, 2021. Abraham transitioned peacefully at home surrounded by his loving family. Abraham was introduced to the Lord through his mother Ella Mae Bennett as a child. He attended church every Sunday and Bible study. He rededicated his life to the Lord many years ago. Abraham received his education from the Baltimore City Public School System. He was a hard-working man. Over his lifetime he held many positions of employment such as Super Speed Carwash, Baltimore Tomato Company, and a driver for Yellow Taxicab Company. When Abraham received his CDL license he started driving trucks and tractor trailers for many years. His last job which he retired from was driving Charter School Buses transporting children back and forth from home to school safely. Abraham was very protective over his children and his family. He was the TRUTH! He was a loving and devoted father and an amazing grandfather. He was an incredible, and brave man with the best sense of humor. He loved his children, family, listening to music, telling jokes, making others laugh, talking his trash, and of course the ladies. Abraham earned a couple nicknames over the years from his family and friends like, Big Money Abe, Boo, Papa Smurf, Tarzan, Uncle Boo, Daddy Abe,and Old man. Some of his hobbies were singing, dancing, boxing, wrestling, crabbing, fishing, drawing, painting, and going to concerts. Abraham enjoyed spending time with his club members at the “Royal”. Abraham’s companion was Vanessa McKnight and they were the bests of friends. They knew each other for over 52 years. They had a relationship that the family never seen before (insider). They would fuss each other out but they would stick together like glue and start laughing. Vanessa also assisted with being a caretaker for Abraham over the years. Abraham is preceded in death by his daughter, Bunnie Jean Bennett; his parents, Edward and Ella Mae Bennett and sister, Shirley Brown. Abraham leaves behind to cherish his memory his companion, Vanessa McKnight; four children, Maria Bennett, Martha Bennett, Tyeisha Benton and his only son, Wendell Bennett; two sisters, Delores Cooper, and Darlene Middleton; one niece, Natalie Middleton; three nephews, Amonti Steele, James Cooper Jr., and Clinton Vanlandingham; one son-in-law, George Benton; thirteen grandchildren, thirteen great grandchildren, three great great grandchildren, and a host of other nieces, nephews, cousins, and friends

ABRAHAM BENNETT was born on September 28, 1938 to the late Edward and Ella Mae Bennett in Baltimore, Maryland. Abraham made his heavenly transition from earth to his final resting place on July 03, 2021. Abraham transitioned... View Obituary & Service Information

The family of Abraham Bennett created this Life Tributes page to make it easy to share your memories.

Send flowers to the Bennett family.