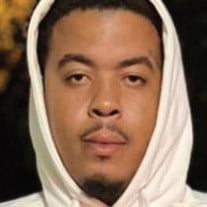 Aaron Casey Adams, son of Nannette Henson-Bush and Glen Adams, was born on July 13, 1992 in Baltimore, Maryland. He departed his life on December 17, 2021. He received his education in the Baltimore City Public School System. Aaron held numerous jobs. He enjoyed being with his family and friends, especially his children. Aaron was a good father. Aaron was well known and loved by many. To his close friends he was known as "Freaky", and "Man-Man" to his family. He leave to cherish his memory: his mother, Nannette Henson-Bush; his father, Glen Adams; sisters, Tynise, Courtney, Ashley, Serenity and Zamora; brothers, Niger and Roman; his children, Zyhaira, Kaycee, MaKayla, Aaron Jr., Aamir, Dymir and Kaysen; two nieces, Dru and Kamille; two nephews, Codie and Lionel Jr.; a host of aunts, uncles and cousins whom he loved; and a close childhood friend/brother, Larry aka "Antlow".

The family of Aaron Casey Adams created this Life Tributes page to make it easy to share your memories.